In this post, I review the beers from Monthly Club’s Beer of the Month Club January shipment. 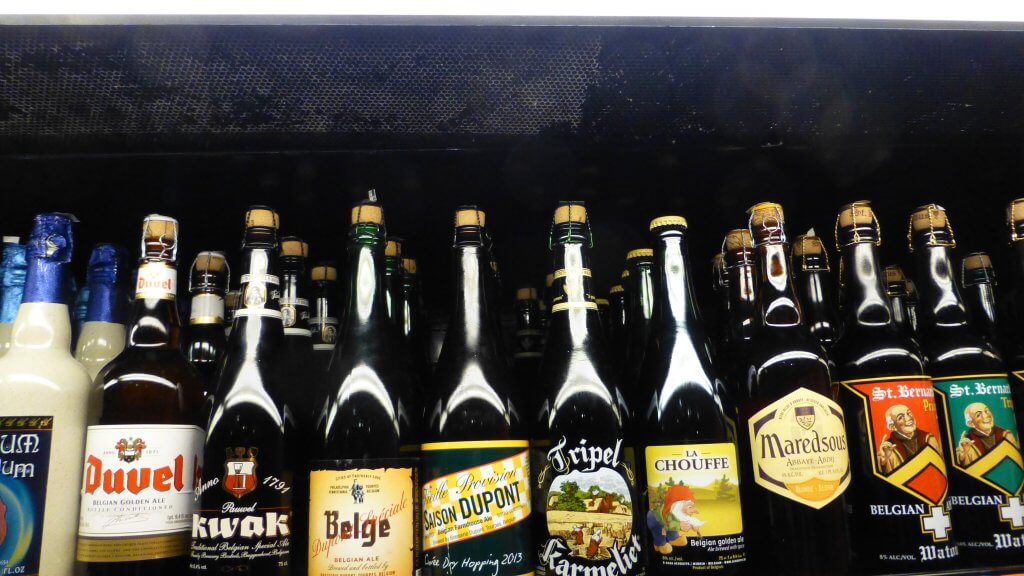 I enjoy a good beer. Its reputation as a frat-boy pastime has concealed the real potential quality beer offers. Beer is not a means to intoxication, particularly not a good beer.  It is, instead, a craft.

When I think of beer, I don’t think of college kids doing keg stands or games of beer pong in fraternity houses. Instead, I think of monks perfecting their art.

Drinking a good beer is an experience you should savor and enjoy. It is not an event you should diminish by drinking more than one—at the most two—at a time. Like a good scotch, the taste, and not the alcohol content, is the main attraction.

Despite having grown up in a faith tradition that did not look kindly on alcohol consumption of any kind, I have, over the years, learned to appreciate quality beer. I kept my faith but abandoned the 19th-century temperance attitudes that entangled itself within it.

I generally affirm that maxim incorrectly attributed to Benjamin Franklin: “Beer is proof that God loves us and wants us to be happy.”

Beer of the Month Club

So, I have over the last several years tried to find good, high-quality beers to enjoy. In pursuit of this goal, I enrolled in a beer of the month club. For $47.95 per month, Monthly Clubs sends me twelve high-quality beers. (I receive three bottles of four different beers.)

I subscribe to the U.S. and International Variety Beer of the Month Club. So, I get a selection of high-quality beers from the United States and around the world.

(They also offer monthly subscriptions to wine, cheese, chocolate, and flowers. I have never tried these other options, but I’d be interested to hear from anyone else who has.)

I recently sampled all the beers from my January shipment. This month I received three bottles of each of the following beers.

I have provided my impressions of each below. I do not consider myself a beer connoisseur. So, I generally cannot detect notes of flowers, earthiness, or anything like that.

Below are general impressions from a guy who just likes beer. They do not come from a professional beer drinker if there is such a thing.

As with everything, everyone has unique tastes in beer. I am no exception.

Guinness, Sam Adams, and Heineken are my beers of choice. I’ve never really cared for the cheaper beers.

I do, however, have a soft spot for Miller High Life, the champagne of beers. It’s the first beer I ever had. At the time I tried it, I thought it was the most delicious drink I ever experienced. Now, I am less than impressed. Nevertheless, I’m nostalgic enough about it that I partake whenever the opportunity presents itself. 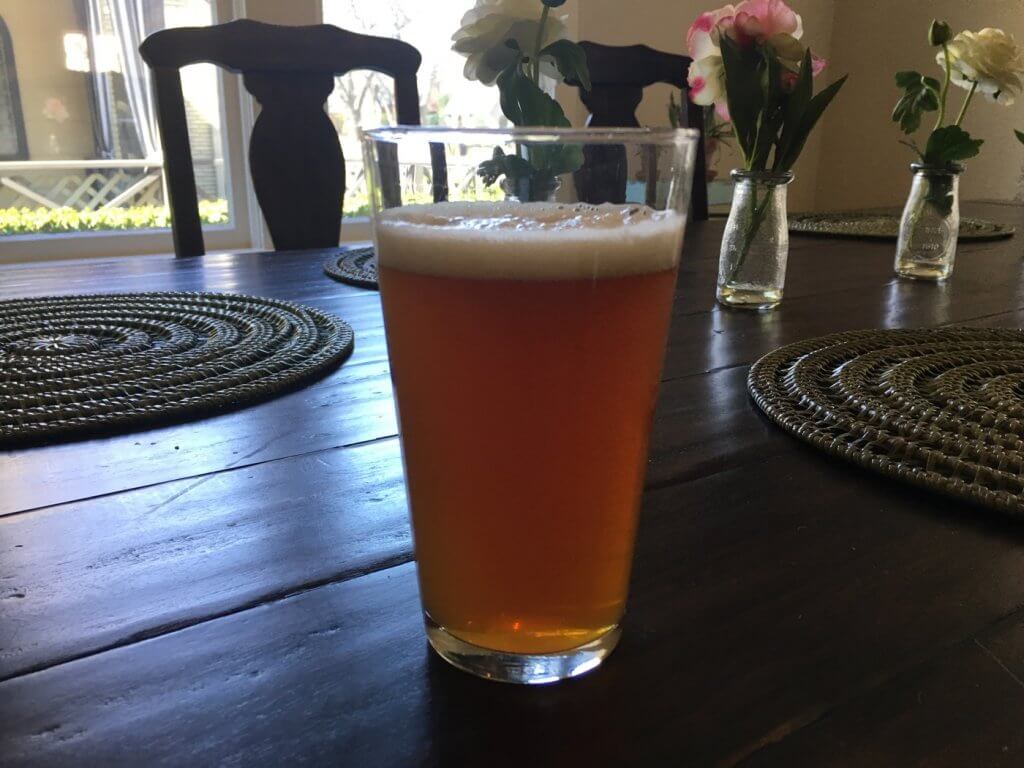 The Stainless Steel IPA by the Ellicottville Brewing Company is an American-made beer with 7.0% alcohol by volume. The alcohol content is higher than average but not as high as you might find among other craft beers.

I’m not a huge fan of IPAs, but I don’t despise them, either. It was a satisfying beer for what it was. Like most IPAs, it was very hoppy, but the taste wasn’t as bitter as some others I’ve had.

The beer was very dry, which I enjoy. Sipping it seemed to suck all the moisture out of my mouth.

This is not a beer to guzzle.

The taste is what you would expect from a high-quality IPA. It was fresh but nothing exceptional. It had a beautiful Amber color to it, and it went down smoothly.

The website describes it as having an aroma with “big juicy fruit notes including citrus, definitely, but also pineapple and other tropical fruity and floral tones.”

I don’t know about that. It smelled like beer to me.

As with cigars, I often find myself unable to figure out what these professional reviewers are talking about. I guess I could detect hints of caramel, in the sense that it had a flavor similar to caramel-flavored coffee.

Overall, though, it was simply a decent beer. I’m not an aficionado, but I’d drink it again.

I had it with a burnt cheeseburger. It was fine. 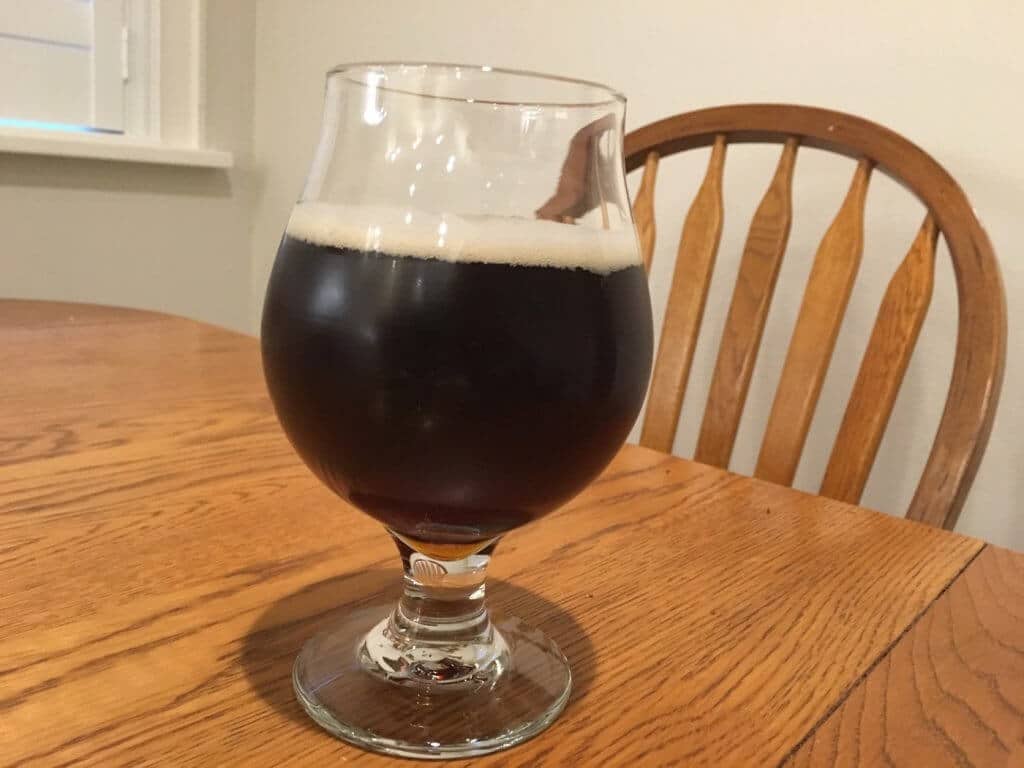 The Grimbergen Double Ale by Brouwerij Alken-Maes is a Belgian beer with 6.5% alcohol by volume. I’m not sure why higher quality beer often comes with significantly higher alcohol content, but I’m sure there’s a reason for it.

This beer seems heavily carbonated. I’m not sure what the proper snooty terminology is to describe this. The first thing I noticed, however, was how fizzy the beer was.

Unlike other beers—such as the previous night’s Stainless Steel IPA—that provide a subtle, though apparent, level of carbonation, the Grimbergen Double Ale seemed to explode with bubbles. It fizzed like I had just dropped in an Alka Selzer.

The beer itself poured dark. It had the coloring of a Guinness without the thick consistency. I could not recognize any particular smells to it. The website notes the aroma of “grape, fig, cherry, and candied berries.”

Again, it just smelled like beer to me. Don’t get me wrong. It didn’t smell like swill. It was not at all reminiscent of the cans of PBR from my college days. But, I definitely didn’t get the impression that I was smelling an air freshener.

As far as taste, it had the typical sweet taste of ale. I could distinguish some citric flavors, but that’s about it. The website describes its having a “vinous quality reminiscent of certain port wines and dark rums, with a spicy note bolstering the rum-like character.”

Again, I don’t know about all of that, but there was a certain similarity to a good port wine. It’s smooth for a beer and heavy enough almost to pass for a wine.

All I really know is that it was pretty good. The carbonation, however, left me a little nauseated as the beer sat heavy in my stomach.

I had the beer with some tacos, a pairing that I would not recommend. The website suggests pairing the beer with “some smoky and spicy sausage or a roasted pork loin.” That’s probably a better way to go. 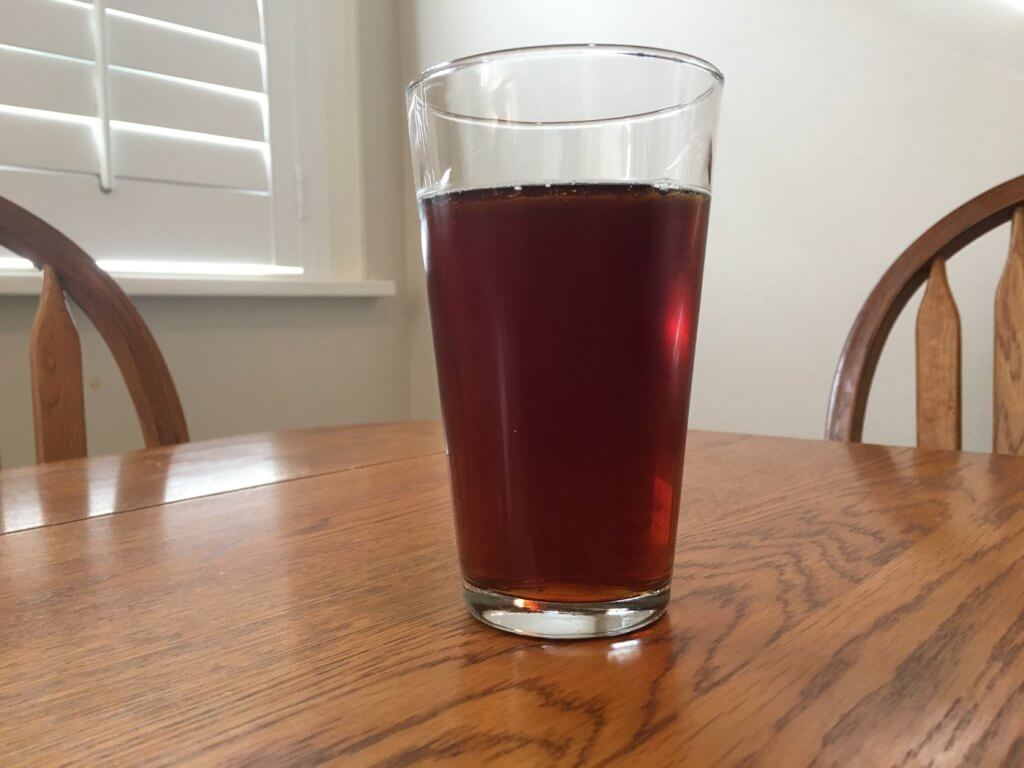 The Stegmaier Winter Warmer is an American Ale with a substantial 7.8% alcohol by volume. I tried this beer while trapped in my house during an ice storm. A beer named “Winter Warmer” felt like an appropriate choice to go with a lunch I prepared on a weekday spent at home.

The beer had a red-brown color. While I could not distinguish the “prominent toffee and caramel notes” that were supposedly “readily apparent in the aroma,” it did smell sweet.

Call me a philistine, but these winter ales always seem like Sam Adams Winter Lager knockoffs. While the beer possessed the sweeter ale flavor, the similarities between the two struck me more than their differences.

And I prefer the Sam Adams. I guess I’m not enough of a hipster to eschew all things mass produced.

Regardless, I enjoyed this beer. It had a sweet taste to match its smell, but it was surprisingly dry. It reminded me of the dry texture of an IPA with the sweetness of an ale.

It was also very malty. I could not taste anything resembling caramel, as the beer’s description provides. Comparisons to brown sugar, however, did not seem too far off to me.

(Once again, I’m left at a loss by statements describing the “woodiness” of the beer. I cannot even begin to understand what that means.)

Overall, the beer was good. I am finding the food pairing recommendations the Monthly Club provides to be consistently spot on. This time they recommend drinking it with pumpkin pie, spice cake, or a poached pear with caramel sauce.

I’m not much for spiced cakes or pears. Still, I think this beer would go exceptionally well with pumpkin pie. Enough so that I’m tempted to get one before I drink the other two bottles in this shipment.

This time, I drank it with a two-day-old hamburger I microwaved. It paired about as well as you’d expect. 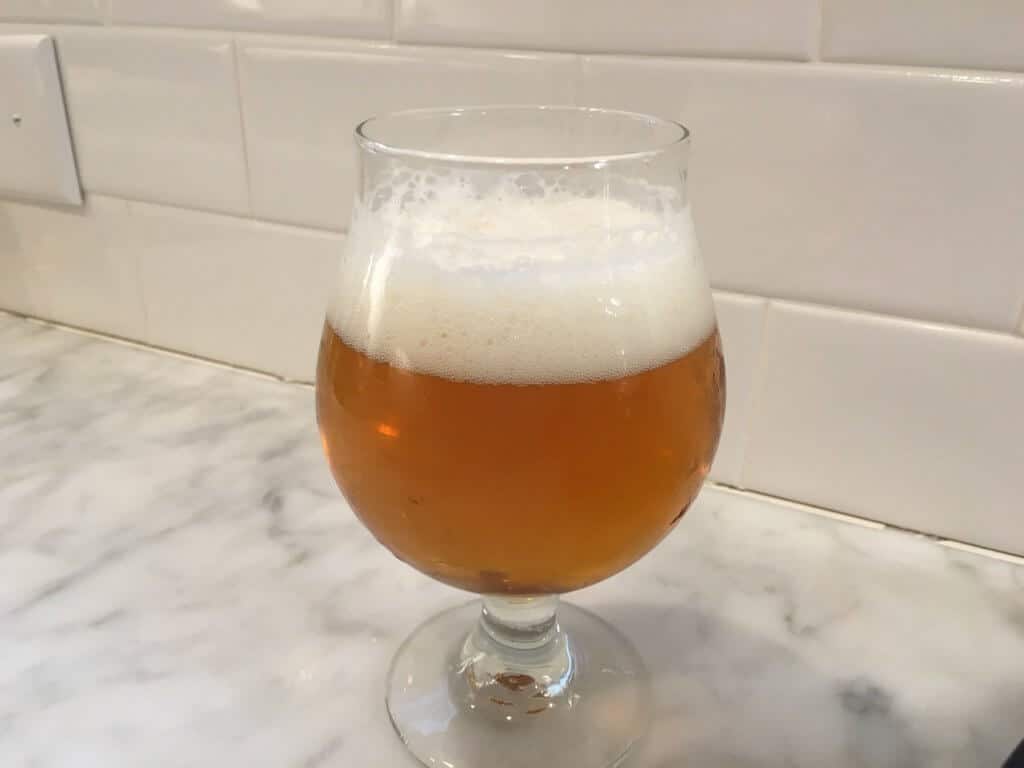 The Grimbergent Blonde is a Belgian Blonde Ale with a moderate 4.7% alcohol by volume.

The beer has an intense hoppy smell that I found to be a little overpowering. I perhaps smelled some yeast, but “yeasty pepperiness and grassy-herbal hops” eluded me.

It did, however, smell like other Belgian beers I have enjoyed. I still have not figured out exactly how to articulate a Belgian smell. Perhaps “grassy-herbal noble hops” is the best way to put it. I just thought it stank. The aroma was sour and a bit much.

Upon pouring it, I contrasted it with the Grimbergen Double Ale from a few days ago. Rather than explosive carbonation, this beer was subtler. It poured like a cheap beer. With its light color and faint carbonation, it looked like a premium version of a Bud Lite. (Cue gasps.)

I doubt, however, that anyone would describe Bud Lite as “presenting a beautiful copper-golden color with brilliant clarity and a robust crop of tight-bubbled foam that coats the glass nicely as it recedes.”

I found the first taste to be bitter and abrasive. My first thought was, I don’t like this. I settled into it, though, and the taste grew lighter as the beer progressed. By the time I finished, I found myself enjoying it.

Perhaps my initial reaction was a simple lack of familiarity with the beer. Maybe this beer is an acquired taste that I gained over the course of one glass. Regardless, I’m glad I finished it, and I would gladly partake again. (Fortunately, I have two more to enjoy in my refrigerator.)

The purported fruitiness of the beer once again eluded me. Perhaps if I continue attempting to compare my own reviews with those of the professionals, I will one day figure out what they’re talking about. (As I read their reviews, I am left wondering if tastings occur in tuxedos with buckets for spitting.)

In the meantime, however, I will just continue to enjoy good beers. Perhaps one day I will understand why.

January’s Monthly Club Beer of the Month shipment was quite good. Perhaps it wasn’t remarkable, but any beer of the month club is going to be hit or miss. Everyone’s tastes are different. Consequently, variety can be a double-edged sword.

This month, however, did not disappoint.

Because of its intense, dark flavors, Brouwerij Alken-Maes’s Grimbergen Double Ale was my favorite from this month’s shipment.

The Cuban Cigar Handbook: A Review

International and Domestic Beer of the Month Club: February

Spread the loveIn this post, I review February’s international and domestic beer of the month club shipment from Monthly Clubs. Photo by Richard Gillin is licensed under CC 2.0. This content uses referral links. Monthly Read more…