I recently smoked the Caldwell Anastasia H Kartell, an extraordinary cigar. I have provided my full review below. This content uses referral links. 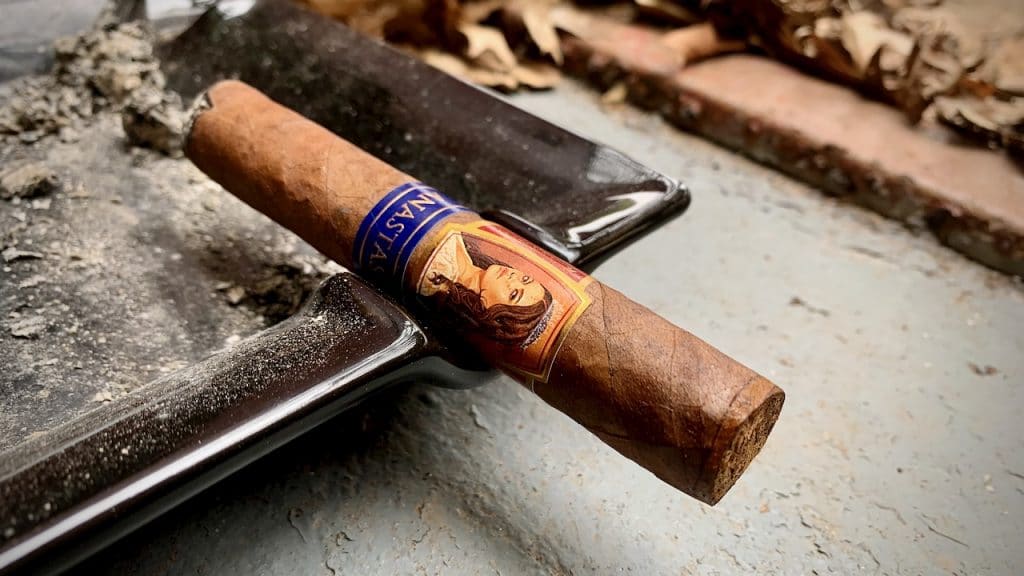 A recent shipment from Cigar of the Month Club included the Caldwell Anastasia H Kartell, a genuinely extraordinary cigar and one of the most delicious smokes that I have ever enjoyed.

A Dominican cigar with a Habano leaf and an undisclosed binder and filler blend, this was a wonderful medium-bodied smoked with a perfectly balanced flavor profile.

Cigar of the Month recommends pairing it with a nice bourbon. As is my usual habit when tasting cigars, however, I enjoyed mine with a cup of coffee.

As the picture indicates, the cigar had a nice label. Detailed and eloquent but not overdone, it provided an excellent preview to the quality of the cigar that it surrounded.

The condition was a bit below what I would typically expect from a cigar of this caliber. Wrinkles and minor flaws covered the cigar, and the foot appeared asymmetrical and squeezed.

The cigar appeared well-constructed despite these flaws, and nothing I saw gave me any serious cause for concern.

The cigar felt inconsistent on the squeeze. It was a bit too spongy in places as if there were some problems during the roll.

The wrapper smelled of cream and caramel. Still, despite this pleasantness, the cigar also smelled a bit pungent.

The cut went off perfectly. I was able to slice through the cap without affecting the rest of the cigar in the least. The Caldwell Anastasia H Kartell maintained its integrity perfectly.

The Caldwell Anastasia H Kartell lit up flawlessly. Getting this smoke started was effortless.

The draw was a bit too easy for my taste, matching the feeling of a cigar rolled too loosely (see above). Nobody likes a really tough draw, but a little resistance adds to the enjoyment of the smoke.

The Caldwell Anastasia H Kartell didn’t have enough, but it wasn’t so loose as to cause concerns about the burn as the smoke progressed.

I think I may have gotten a fluke of a stick, one that was simply too loosely rolled.

On the retrohale, the Caldwell Anastasia H Kartell had intense flavors of pepper. Yet, it was somehow able to remain smooth. It was interesting—and delicious—all around.

Any concerns I may have had about the cigar’s mediocre start began to disappear.

Flavor of the Smoke on the Palate

As I started the smoke, I was anticipating a decent, solid B cigar. The structure of the stick itself left something to be desired, and the aroma of the wrapper seemed a little off.

Such concerns, however, quickly faded away. The Caldwell Anastasia H Kartell was one of the best-tasting cigars that I have ever had.

The cigar had flavors of smooth cream with hints of pepper mixed in. It was extremely smooth and mellow, but not so much as to be bland or otherwise lacking in distinct flavors.

The Caldwell Anastasia H Kartell was quite simply an extraordinarily delicious cigar. In this most important of areas, it was pure perfection.

After the initial light, the smoke of the cigar smelled of cream. It was also very smooth. It was not so pleasing as to burn as incense, but it was in that ballpark.

As good cigars sometimes do, the Caldwell Anastasia H Kartell burned a bit uneven at first. It eventually evened up, but, unfortunately, the cigar went out on me twice. It burned light and smooth but was not able to maintain itself as it should have.

This, too, gave indications of a cigar too loosely rolled, unfortunate given the extraordinary quality of the tobacco.

The ash on this cigar was excellent. It didn’t have the type of strength and consistency that would allow for building up a long stick of ash, as I like. Still, it did not cause me any problems, and it maintained a beautiful, even appearance.

Effects of the Smoke

The cigar left me feeling relaxed and mellow, precisely what I want from a cigar.

Indeed, this cigar was truly amazing. It was delicious from beginning to end and left me feeling sad when it was gone.

The Caldwell Anastasia H Kartell showed itself to be well-made here. No flakes of tobacco found their way into my mouth at any point during the smoke.

While not perfect, this was a truly magnificent cigar, and I will remember it as one of the best-tasting cigars I ever had. While there were some structural issues at work here, I am anxious to try another one to see if maybe I got a stick that was just a little off.

This was an A+ smoke in a B stick.

As always, I recommend Monthly Clubs’ Cigar of the Month Club. I’ve been a member for years. If you join, you’ll get five premium cigars delivered to your door every month.

If you’re interested and would like to use my referral link, I would appreciate it. If you’d prefer not to use my link, however, I still recommend the club. Just go to Monthly Clubs’ Cigar of the Month website to explore Monthly Clubs’ offerings.