I recently smoked the Cohiba Red Dot Lonsdale Grande, an excellent cigar consistent with the high-quality of the Cohiba brand. I have provided my full review below. This content uses referral links. 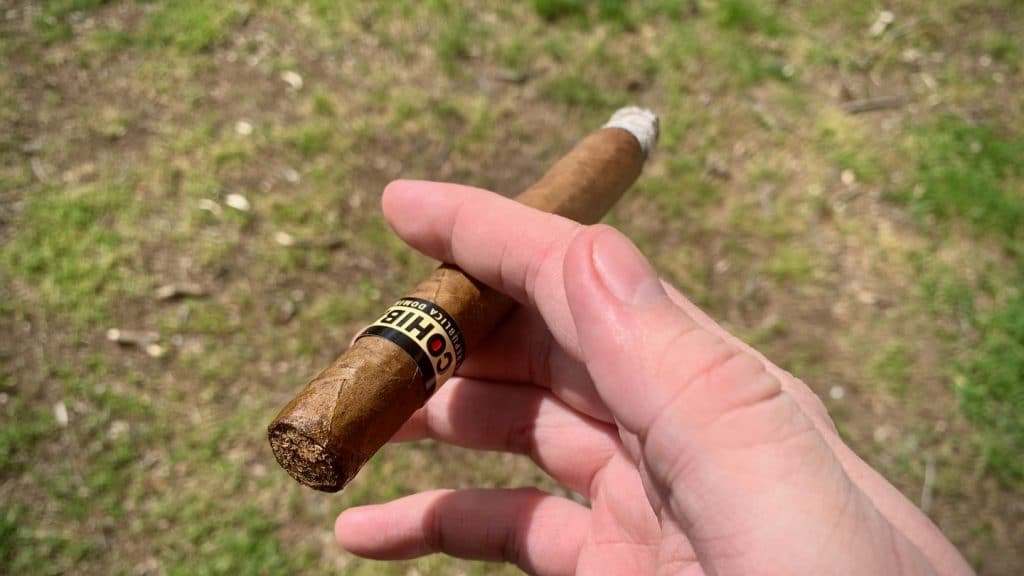 I recently received some Cohiba Red Dot Lonsdale Grandes as a gift. Cohiba is one of the most consistently great cigar brands on the market today, and this stick was no exception.

A Dominican cigar with Dominican fillers and a Cameroon wrapper, this was an incredible smoke all around. I don’t think I’ve ever been disappointed with a Cohiba cigar, and this one was no exception.

I enjoyed mine with a good cup of coffee with just a bit of cream, which complemented this cigar well.

It took me about one hour and ten minutes to smoke through this cigar.

As the picture indicates, the label was typical Cohiba simplicity—though I understand that Cohiba recently changed the label on its Red Dot series to something more distinctive for the line.

The Cohiba Red Dot Lonsdale Grande was overall well constructed, as you would expect. The cigar I had, however, may have been a fluke. It was a bit asymmetrical, having some significant bulging. There were also wrinkles at the seams.

These flaws were quite minor, but they were inconsistent with what I expect from a Cohiba.

The Cohiba Red Dot Lonsdale Grande felt nearly perfect. If I had to find something to criticize, I’d say it was just a bit too spongy. Even that minor criticism, however, may be a stretch.

The pre-lit cigar smelled terrific with notes of earth, nuts, and leather. The aroma was subtle but not weak.

The Cohiba Red Dot Lonsdale Grande lit up quickly and evenly without much resistance at all.

The draw was perfect all the way through. It was a nice, easy, relaxing smoke, perfectly rolled with just the right amount of resistance.

On the retrohale, I picked up strong notes of nuts with a bit of pepper mixed in. It was smooth and delicious.

On the cold draw, I picked up hints of nuts. After the light, it had hints of leather and some cream.

As with the retrohale, it was deliciously smooth. It was consistent with the high quality I’ve come to expect from Cohiba, though I wouldn’t say it was quite in the top tier here.

After the initial light, the cigar’s smoke smelled of earth and leather. It was incredibly smooth and appetizing.

The burn reflected the perfect roll characteristic of Cohibas. It burned perfectly from beginning to end.

The Cohiba Red Dot Lonsdale Grande left me feeling relaxed and mellow, precisely what I want.

The Cohiba Red Dot Lonsdale Grande again showed itself to be expertly constructed. No flakes of tobacco found their way into my mouth at any point during the smoke.

This was an absolutely fantastic cigar that I smoked all the way down to the nub. +1

This was an extraordinary cigar, as I expected from a Cohiba. I love these cigars, but they, unfortunately, have a price tag to match their quality. At about $13.24 per cigar, this is a once in a while smoke for me.

As always, even though I didn’t get this cigar from it, I recommend Monthly Clubs’ Cigar of the Month Club. I’ve been a member for years, and I love it. (And I have received Cohibas—along with other top-quality cigars—through it before.)

If you join, you’ll get five premium cigars delivered right to your door every month for just $32.95, including shipping.