I recently smoked the Cuba Libre “The Brute,” a good cigar at an unbeatable price. I have provided my full review below. This content uses referral links. 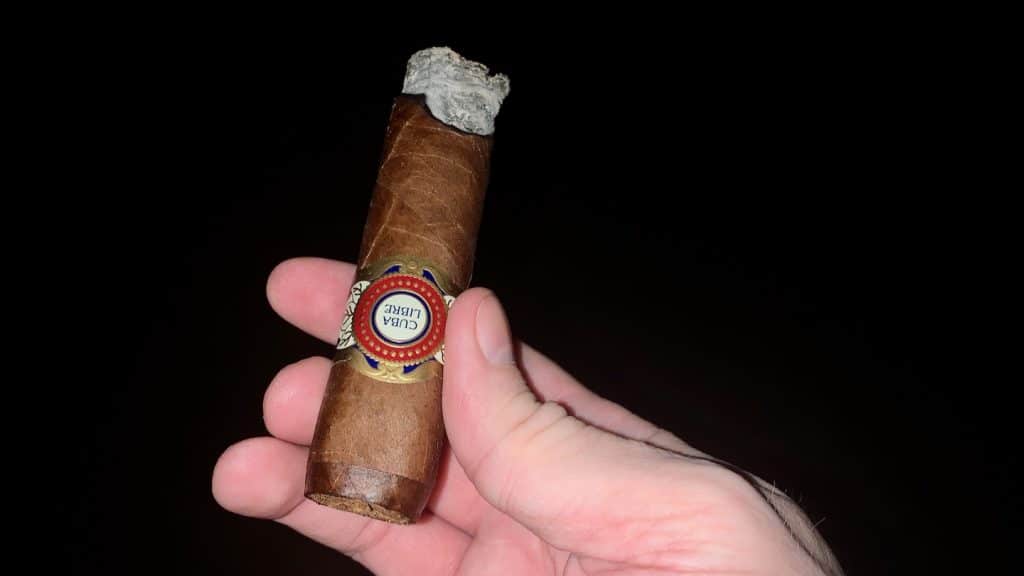 A recent shipment from Cigar of the Month included the Cuba Libre “The Brute.” This is a good cigar at an unbeatable price.

A Honduran cigar featuring a Cuban-seed Corojo wrapper, a Nicaraguan binder, and a mixture of Cuban-seed Honduran long-fillers, this was a nice cigar all around.

Cigar of the Month recommended pairing it with a pilsner or helles lager. The only beer I had on hand, however, was Dos Equis, which was close, and it went well with this smoke.

As the picture indicates, the label was nice, simple, and eloquent.

The Cuba Libre “The Brute” looked a bit dry but was otherwise in excellent shape.

The cigar felt perfect. It had just the right amount of give on the squeeze and was consistent throughout.

The pre-lit cigar smelled terrific with hints of leather and earth.

The cut was ok. My cutter was a bit too small for this larger cigar, so there was some slight fraying. It wasn’t that bad, but I should have probably used a scissor cutter here.

Lighting the Cuba Libre “The Brute”

The Cuba Libre “The Brute” lit up fine, but it was a bit stubborn to get going.

The draw was excellent from beginning to end. It was easy, with just the appropriate amount of resistance.

On the retrohale, the Cuba Libre “The Brute” had hints of pepper with a bit of an uncomfortable bite to it.

On the cold draw, I picked up hints of chocolate and leather. After the light, the Cuba Libre “The Brute” had notes of earth and pepper. The taste was good but not exceptional.

After the initial light, the cigar’s smoke smelled of earth, leather, and pepper.

The burn resulted in some initial canoeing, but it evened out fairly quickly. After that, the cigar burned perfectly through the remainder of the cigar.

The Cuba Libre “The Brute” left me feeling great and slightly relaxed.

The Cuba Libre “The Brute” showed itself to be well-made here. No flakes of tobacco found their way into my mouth at any point during the smoke.

I enjoyed this cigar, and I smoked it all the way down to the nub. I thought that merited an extra point. +1 point

Overall, this was a good cigar, and, at $3.00 per stick, it’s available at an unbeatable price.