In this excerpt from my book The Evangelical and The Open Theist, I continue my discussion of Exodus 32:7-14 and divine foreknowledge. 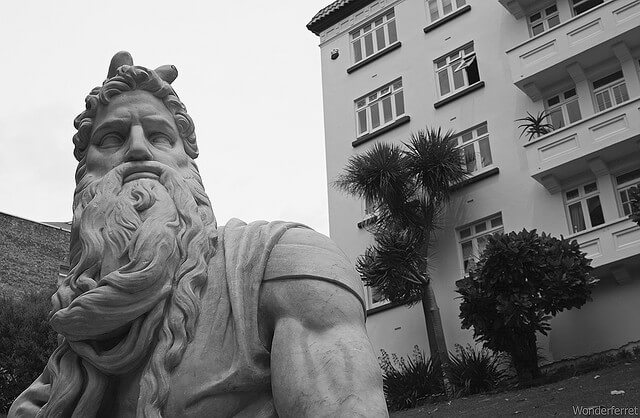 Moses then begins to make a series of arguments in his effort to persuade Yahweh.

First, Yahweh had hitherto gone to great lengths to ensure the people’s deliverance from Egypt.[1] Not only did the Israelites not want to leave Egypt in the first place, but as soon as they got into the wilderness, they wanted to turn back.

Yahweh had to go to even greater lengths to convince Pharaoh to let the Israelites go, and the plagues of Egypt and the deliverance through the Red Sea demonstrate that the universe itself had to be disrupted in order to deliver the Israelites.[2]

Of course, the golden calf incident is much worse than the previous “murmuring in the wilderness,” but does that justify total annihilation of the people? Moses is asking Yahweh to be reasonable![3]

He has already brought them too far to destroy them in the wilderness.[4] If he were to follow through with his plan, the entire Exodus event would be for naught.[5]

Second, the Egyptians will misunderstand Yahweh’s actions, not as a fair and just judgment for sin, but as a display of Yahweh’s evil intentions.[6]

A recurring theme throughout the Exodus narrative (as well as throughout the prophets) is Yahweh’s acting in such a way that Egypt and all the nations may know that he is God.[7] Moses puts Yahweh’s very honor at stake.[8]

Third, Yahweh should have mercy on the Israelites—who are, after all, his own people—in the face of such disaster befalling them.

Lastly, Moses invokes the Abrahamic covenant, reminding Yahweh of the oath he made with the Israelites’ forefathers to make their descendants numerous and bring them into a great land.[9] Yahweh “has made a commitment to Israel, and would not God be following the same course as the people by going back on such a promise?”[10]

Of course, these are not arguments that Yahweh has yet to consider. Indeed, his promise to make Moses into a great nation shows that he had his promise to Abraham in mind.

The advocate, and not the arguments themselves, makes the difference. Yahweh is open to hear from Moses, whose opinions form a central ingredient in Yahweh’s formation of future events.[11]

If Moses wills and thinks and does these things, they take on a significance that they do not carry when treated in divine isolation. It is not a matter of Moses’ winning the argument but of a relationship that God takes seriously.[12]

This same Hebrew word appears in Genesis 6:7, when Yahweh describes his intentions to destroy mankind: “Yahweh said, ‘I will blot out man whom I have created from the face of the land, from man to animals to creeping things and to birds of the sky; for I am sorry that I have made them” (NASB, emphasis added).

In Deuteronomy 32:26 the same word appears again: “Yahweh will judge his people and have compassion on his servants” (emphasis added). In addition, Judges 2:18 reads,

Whenever Yahweh raised up a judge for them, he was with the judge and saved them out of the hands of their enemies as long as the judge lived; for Yahweh had compassion on them as they groaned under those who oppressed and afflicted them (emphasis added).

The word expresses a change of heart. Here, Moses urges Yahweh to repent from his intended wrath and have compassion on the Israelites instead.

When Moses finishes his argument, Yahweh is silent. Yet the text makes it clear that Moses has moved him to pity Israel for his own threats against her,[14] stating only that “Yahweh relented.”[15]

A Just but Merciful God

While the text does imply that Yahweh’s anger is tempered, it does not say he totally withdraws his judgment. Exodus 32-34 gives an account of Yahweh’s severe—though significantly reduced—punishment.[16] Yahweh is “merciful and gracious…but will not clear the guilty.”[17]

Nevertheless, this passage demonstrates a change of heart on Yahweh’s part, contributing greatly to the scriptural motif of divine repentance and the resulting ramifications for systematic theology.

A brief survey of the Pentateuch, however, demonstrates that Moses’ intervention and Yahweh’s repentance do not change this generation’s eventual fate. They all do eventually die in the wilderness as a result of God’s judgment, save Joshua and Caleb.

This does not, however, negate Yahweh’s change of heart or the biblical motif of divine repentance. Yahweh never directly destroys the nation as he threatens in this passage; he simply waits until the current generation dies off before leading Israel into Canaan.

Nevertheless, in a very real way, Moses’ intervention saves the lives of future generations of Israelites. Yahweh does, after all, show mercy to all those Israelites under twenty years old at the time the people refused to go up and take the Promised Land, an act of mercy never suggested in Exodus 32.

This passage, with its descriptions of Yahweh’s threat to destroy his people and the subsequent divine repentance, is difficult to reconcile with the doctrine of exhaustive divine foreknowledge.

At least in this passage, the open model of a God in dynamic relationship with human beings facing a future that is to some extent uncertain adheres nicely to the biblical witness. In fact, open theists have a much easier time making sense of this passage—and those like it—than do those holding to a traditional understanding of divine foreknowledge.

[10] Fretheim, Exodus, 285-86. Although Yahweh could have remained true to his covenant with Abraham through Moses—since Moses was a descendant of Abraham—it would have been like starting with a new Abraham, which the narrative never portrays as a desirable option. Fretheim, Exodus, 286.

[12] Ibid. During his appeal, Moses “sought the favor of Yahweh his God.” The word translated “sought” in the NIV appears elsewhere in Scripture to describe sickness or affliction (e.g., Gen 48:1; Deut 29:22). In Judges 16:17, for example, when Samson tells Delilah the secret of his strength, he uses the word to say, “If my head were shaved, my strength would leave me, and I would become as weak as any other man” (emphasis added). The word carries with it connotations of humility. Though Yahweh takes Moses’ arguments very seriously, Moses seeks Yahweh’s favor by humbling himself. Yahweh’s sovereignty in determining these matters is never in doubt.

[13] These passages never indicate that God repents of sin, as if any of God’s actions were inappropriate or unjust. Instead, they teach that God repents of evil, that is, judgment. “Hence God’s repenting of evil has reference to a decision for judgment” (Ibid., 286).

[18] Perhaps it could be argued that Yahweh delayed judgment in order to save the lives of future generations of Israelites. This would not, however, negate his repentance in the sense that he had originally intended to completely annihilate the nation, thereby assuring the nonexistence of future generations. Saving their lives still represents a reversal in the divine plan.