I recently smoked the Fonseca Cubano Viso Fuerte Belicoso, a mediocre cigar at best. I have provided my full review below. This content uses referral links. 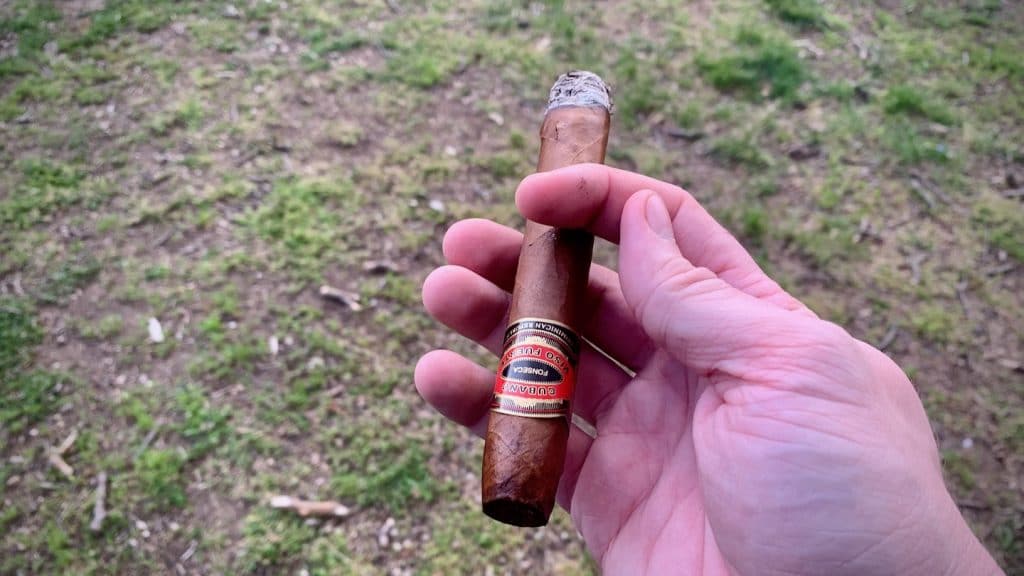 A recent shipment from Cigar of the Month included the Fonseca Cubano Viso Fuerte Belicoso. This was a mediocre cigar at best that I do not intend to smoke again.

A Dominican cigar with a mixture of Dominican and Cameroon long-fillers with a Habano binder and a Dominican Corojo wrapper, this medium body cigar was just barely ok.

Cigar of the Month recommends pairing it with a single malt scotch. I had it with a glass of Devil’s River Small Batch Texas Bourbon that I bought through Flaviar. This is a fantastic bourbon that paired well with this cigar.

In my grading system and review below, I have adopted the Cigar Journal: For the Discerning Aficionado method. It provides an excellent system for keeping track of my favorite smokes, and I recommend it to every cigar smoker.

It took me about an hour and fifteen minutes to smoke through this cigar.

As the picture indicates, the label was well done. It was detailed, yet reasonably simple.

The Fonseca Cubano Viso Fuerte Belicoso came in good but not great condition. There was some wrinkling over the body and damage at the foot. Then, once I started smoking it, the wrapper began to split.

This cigar was too firm in places and inconsistent throughout, suggesting significant imperfections on the roll.

The pre-lit cigar had a subtle aroma to it. I picked up what may have been earth and cocoa, but it was so weak that it was difficult to pick up much of anything.

The Fonseca Cubano Viso Fuerte Belicoso lit up fairly quickly and without much issue.

The draw on this cigar was just ok. It started off too tight, and it stayed that way all the way through. This significantly reduced the enjoyability of this cigar.

On the retrohale, the Fonseca Cubano Viso Fuerte Belicoso had hints of pepper and toast. It was smooth, but it was just too weak to enjoy fully.

On the cold draw, I picked up hints of earth and spice. Like the retrohale, after the light, the Fonseca Cubano Viso Fuerte Belicoso’s flavor was simply too weak and frankly quite bland. The only flavor I could pick up was vanilla.

It was just a mediocre cigar at best.

After the initial light, the cigar’s smoke smelled of earth, pepper, and cocoa. It was smooth, but just a bit too subtle.

The filler burned faster than the binder and the wrapper making for an uneven and ugly smoke. It did, however, stay lit.

The Fonseca Cubano Viso Fuerte Belicoso gave me a nicotine high, which I don’t like.

The Fonseca Cubano Viso Fuerte Belicoso did show itself to be well-made here. No flakes of tobacco found their way into my mouth at any point during the smoke.

Overall, this was a mediocre cigar at best. There was nothing impressive about it at all. The only good thing about it is the price. At $2.80 per stick, it’s at least affordable.

As this review suggests, I don’t like every cigar I get, but most of them are wonderful. And even the ones I don’t like help me better understand what I like and further refine my palate.