I recently smoked the General Grant Corona, the best bad cigar I’ve ever had. I have provided my full review below. This content uses referral links. 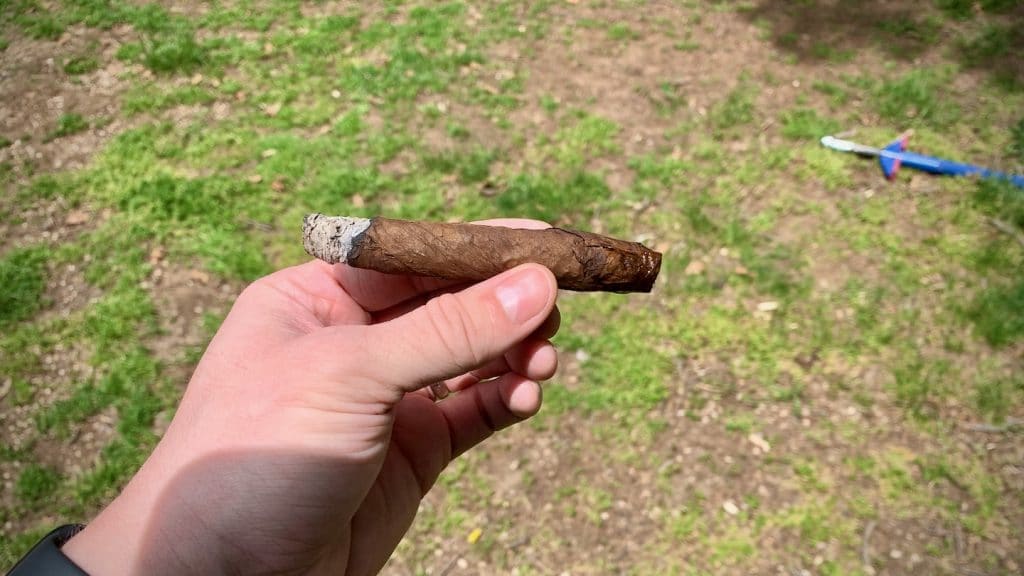 Some time ago, I purchased a box of General Grant Corona cigars. They were incredibly cheap, and they had some decent reviews online as an everyday smoke. So, I decided to give them a try.

A Dominican cigar made with central American tobacco and a Sumatran wrapper, there was nothing special about this cigar, but it’s appropriately priced for its so-so quality. It’s perfect for a relatively quick smoke while engaging in other activities.

It took me about forty minutes to smoke through this cigar, but I was taking my time. I anticipate its typically taking twenty to thirty minutes.

The cigar had no label. As its intent is to call to mind the image of General Grant smoking cigars from pictures taken during the Civil War, this was entirely appropriate.

The General Grant Corona came in a condition fitting its price. It was a bit of a wrinkled mess, but, again, this appears intentional as a throwback to nineteenth-century smokes. However, it also began to unwrap a bit during the smoke.

This cigar was just a spongy mess. There was no consistency at all, and it felt like the wrap was a bit haphazard.

The pre-lit cigar smelled of earth, tobacco, and perhaps a hint of cream. It wasn’t bad.

The cut was kind of a mess. It was hard to tell where the cap ended to find the right place to cut it. Still, the cut went off surprisingly well, particularly for this type of cigar.

The General Grant Corona lit up quite easily. Given its small size, that was to be expected. It almost felt like lighting a cigarette.

The draw was way too loose, exacerbated by air escaping through holes in the wrapper. The draw was so loose, in fact, that it almost felt like I was smoking nothing at all.

On the retrohale, the General Grant Corona was almost tasteless. I barely picked up hints of pepper and cream, but the flavors were so weak I can’t be sure.

The General Grant Corona was almost tasteless. Maybe there were hints of cream. It was tough to detect much of anything. The one thing I can say is that it wasn’t bad, which is a meaningful statement about a cigar like this.

After the initial light, the cigar’s smoke smelled a bit earthy and almost sweet.

The burn was fine. There was just some minimal unevenness during the smoke, but it didn’t cause a problem.

The ash, too, was fine. It was nothing impressive, but it also didn’t cause any trouble.

I would anticipate a cigar like this to make me sick, but, surprisingly, it had no physiological effect on me at all. This suggests that, for all its messiness, it was actually made with quality tobacco.

For all its fraying, this cigar actually showed itself to be well-made here. No flakes of tobacco found their way into my mouth at any point during the smoke.

Overall, this was a good cigar for what it was. It wasn’t a premium cigar, but it’s actually the best bad cigar I’ve ever smoked. At $1.08 per stick, the price is hard to beat. I probably won’t be buying another box anytime soon, but I may reconsider if I ever take up golf again.

As always, even though I didn’t get this cigar—or any cigar like this— from it, I still recommend Monthly Clubs’ Cigar of the Month Club. I’ve been a member for years, and I love it. If you join, you’ll get five premium cigars delivered right to your door every month for just $32.95, including shipping.

Great review of a little cigar!