In this post, I review the Gilberto Oliva Reserva 550 cigar. 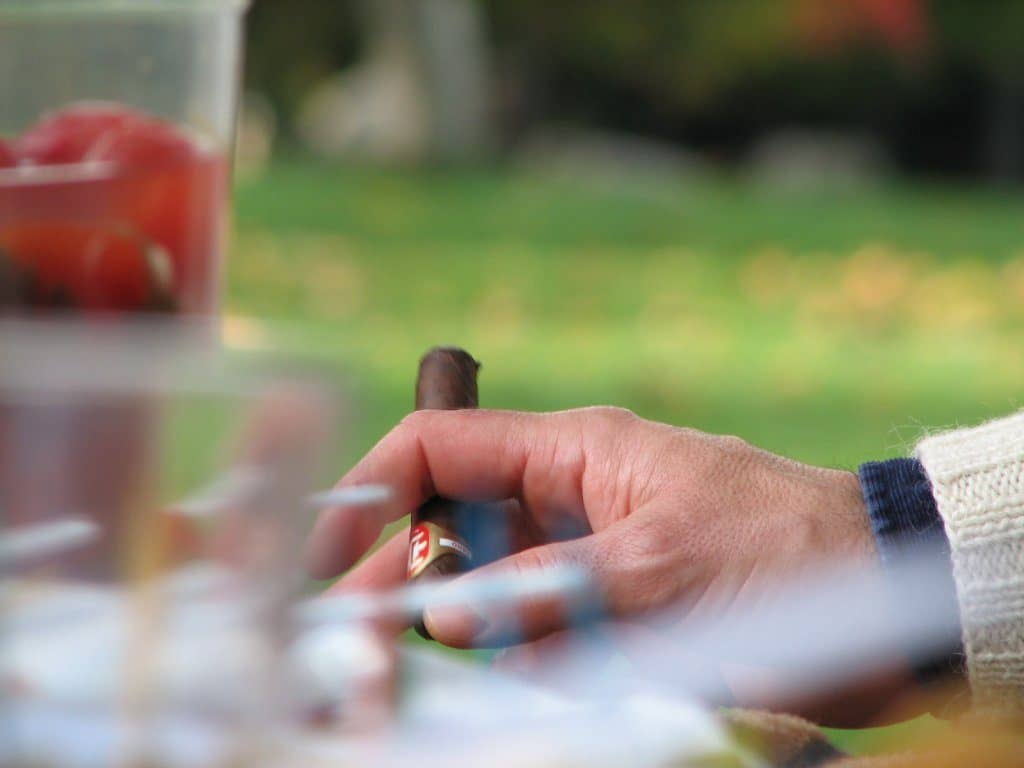 I have been a loyal subscriber to Monthly Club’s Cigar of the Month Club since June 2016. From Monthly Clubs’ February Shipment, I previously reviewed the Drew Estate Tabak Especial Café con Leche, the PSyKo Seven Robusto, and the Villiger La Capitana Toro.

This week, I’d like to discuss another cigar from Monthly Clubs’ February shipment: the Gilberto Oliva Reserva 550.

The Gilberto Oliva Reserva 550 is a mild-to-medium-bodied Nicaraguan Robusto cigar. I found this cigar to be a nearly perfect mild smoke. It’s good for a morning cigar, but I would probably not recommend it with a heavy meal. The flavors are too mild and too easily overpowered.

I greatly enjoyed the Gilberto Oliva Reserva 550, and I may consider purchasing a box. Priced at just $5.22 per cigar for a box of 20, it’s both an excellent cigar and an excellent value. I recommend it to anyone who likes a high-quality mild smoke.

I wouldn’t recommend the Gilberto Oliva Reserva 550 as a go-to cigar, but it’s perfect for what it is. It’s a good smoke when you’re in the mood for something mild, whether in the morning, before a meal, or as a lead-in to a more heavy-bodied cigar.

With a 5-inch length and a 50-ring gauge, this Robusto is good for a short smoke. The burn, however, is too slow if you want a quick smoke on a schedule. I’d plan to spend at least forty-five minutes, though of course, your mileage may vary.

The Gilberto Oliva Reserva 550 is the fourth cigar I have reviewed from Monthly Club’s February shipment. I still have yet to be disappointed by any of the selections.

(You can also look elsewhere on my website to find reviews of the Drew Estate Tabak Especial Café con Leche, the PSyKo Seven Robusto, and the Villiger La Capitana Toro.)

The Gilberto Oliva Reserva 550 has a nice, light-brown wrapper. Somewhere between a claro and Colorado claro coloring—see its picture—the cigar’s body matches its appearance. (Monthly Clubs gives it a 5-level strength, which seems about right.)

The cigar has the typical dry but not too dry appearance common to premium cigars but lacks the oily shine that the best cigars possess and that I prefer.

The wrapper had clear vein lines, significantly more distinctive than the other cigars that I have sampled from this month’s shipment. It was, nonetheless, nothing over the top.

I certainly did not expect them to cause any kind of burn issues. (They didn’t.) It also wasn’t anything to diminish severely the aesthetic qualities of the cigar.

Overall, the Gilberto Oliva Reserva 550 was a good-looking, if somewhat flawed, cigar. 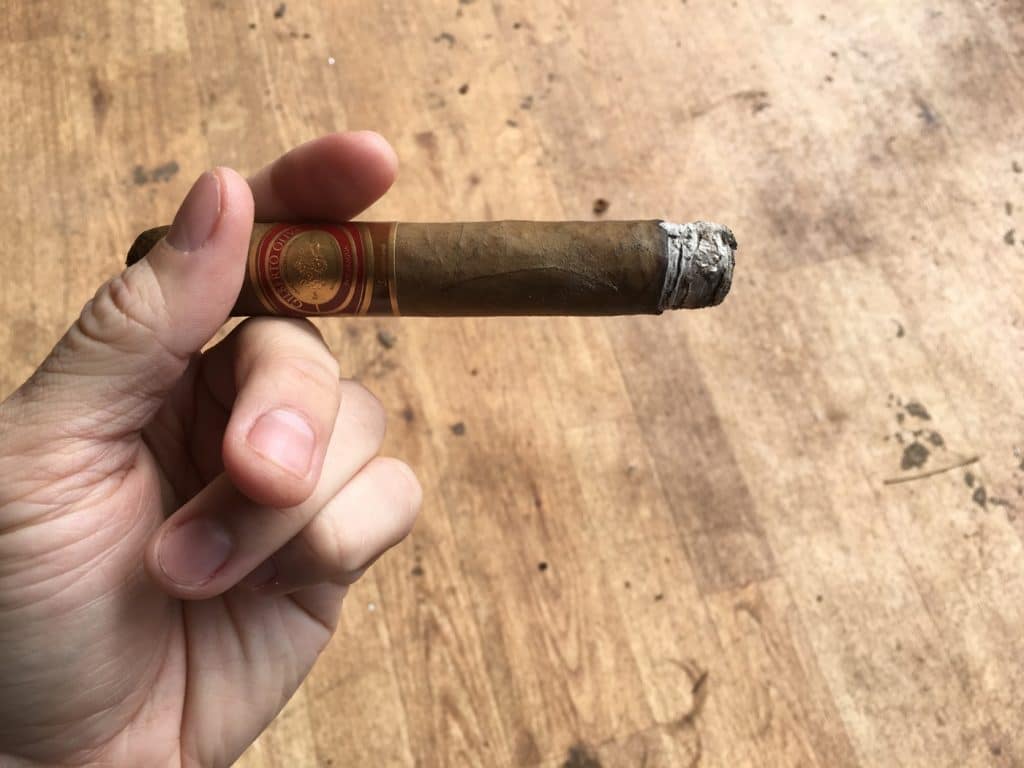 The punch was easy. As I have stated before, I generally prefer to punch a hole in my cigars, rather than cut them, wherever possible. This helps diminish the risk of damaging the wrapper. Sometimes, though, the shape of the cigar or the difficulty of the draw make such a puncture impossible or impractical.

The punch was smooth, and I was able to pierce the cigar without much effort. The cap split a bit under the pressure, but it was nothing significant. Further, the split in the cap did not extend to the wrapper, which maintained its clean, structural integrity.

This was a good sign, as it showed that the leaf was not too dry. The leaf did not crumble or otherwise give me pause. I am able to keep my humidor’s humidity stable using Bovida packs, so I know it stored well.

Occasionally, however, I receive cigars that are damaged or dried out in the shipping beyond the point of saving. (This has not yet happened with Monthly Clubs.) Whenever the wrapper crumbles during the cut, it’s usually a clear give away that that is what happened.

I am always a bit relieved, however, when, as here, the cut is smooth and the wrapper holds up nicely under the pressure.

After the cut but before lighting up, I was able to pull air through the Gilberto Oliva Reserva 550 with only the slightest resistance. I feared there may be some draw issues but not enough to prompt me to go ahead and cut off the cap. I wanted to try it with the punch before making a more substantial cut.

The Gilberto Oliva Reserva 550 was firm to the touch. It had some give, but it was minimal. The cigar did not feel stiff, as if it were dried out.

Nonetheless, it did feel firmly constructed and perhaps tightly rolled. I initially feared this would result in a difficult draw. Once I lit up, my suspicions of a tight draw were somewhat confirmed, but it was nothing to hinder the smoke.

The draw was a bit tight but nothing too difficult. After it got going, the initial difficulty somewhat faded.

The Gilberto Oliva Reserva 550 smoked fine. At various points, I considered cutting off the cap to open up a greater draw. I continued on, however, until I had smoked it down to about the seventy-five percent point.

At that point, I finally had to break down and cut off the cap. The cap came off easily, even after dampened by the saliva that had built up over the course of the smoke, and the draw became easier.

The Gilberto Oliva Reserva 550 was nonetheless well constructed. While I’d would have preferred a slightly easier draw, it’s difficult to achieve perfection here.

If the draw is too loose—as it probably was on my last cigar—then it can feel like I’m puffing nothing at all. I like to know that I am smoking a cigar. If it’s too tight, however, it’s a frustrating experience. The Gilberto Oliva Reserva 550 avoided both of these extremes.

As the burn line neared the band, I was able to peel it off without any difficulty. The Gilberto Oliva Reserva 550 maintained its structural integrity throughout, and I was able to smoke it down to the numb. If I had smoked it any further, the flame would have burned my fingers.

While not perfect, the Gilberto Oliva Reserva 550 was a very well put together cigar.

The smell of the wrapper before the light is hard to describe. It was not quite sweet. Earthy is the best way I can think to define it. It was smooth but nonetheless smelled a bit dry.

After punching the head, I drew in a puff on the unlit cigar. It tasted smooth and mellow. Toasting the foot with my lighter enhanced this impression. The smoke’s aroma was likewise smooth. It had a light body to it with a bit of a spicy aroma.

The Evenness of the Burn

The Gilberto Oliva Reserva 550 lit quickly. In fact, it took the flame and ignited almost immediately, taking me a bit by surprise. The flame took to the cigar evenly and uniformly.

As the burn progressed through the first few draws, the wrapper began burning a bit unevenly with just the slightest of canoeing. This corrected itself quickly, however, and, within a few draws, the cigar was burning evenly and uniformly throughout.

As I smoked the Gilberto Oliva Reserva 550 down to the fifty-percent point, the cigar maintained its near perfect, even burn. Somewhere between the fifty and seventy-five percent point, however, the cigar began burning unevenly.

Once again, however, the cigar seemed to move through the anomaly in the construction quickly. By the time the Gilberto Oliva Reserva 550 burned down to the seventy-five percent point, it corrected itself and once again resumed its near perfect even burn.

The ash maintained a grey and black color at first and was a bit crumbly. It did not appear that solid with significant cracks appearing early on. The ash failed to maintain a solid, grey state that I like to see, and it fell off on its own after only about an inch of burn.

As the smoke progressed, however, the construction appeared to grow more solid. The ash took on a more stable consistency, and I was no longer afraid of its falling off in my lap.

The burn rate on the Gilberto Oliva Reserva 550 was nearly perfect. If I were searching for a flaw, I would say that it burnt a bit too quickly in the beginning, but even that would be a stretch.

When I left it on the ashtray between puffs, the Gilberto Oliva Reserva 550 maintained an even smolder. I was never afraid that it would go out if I did not keep puffing away. I never once had to re-light the cigar, not even when it had burned down near the nub.

On this point, I would have to say that the Gilberto Oliva Reserva 550 was nearly perfect. 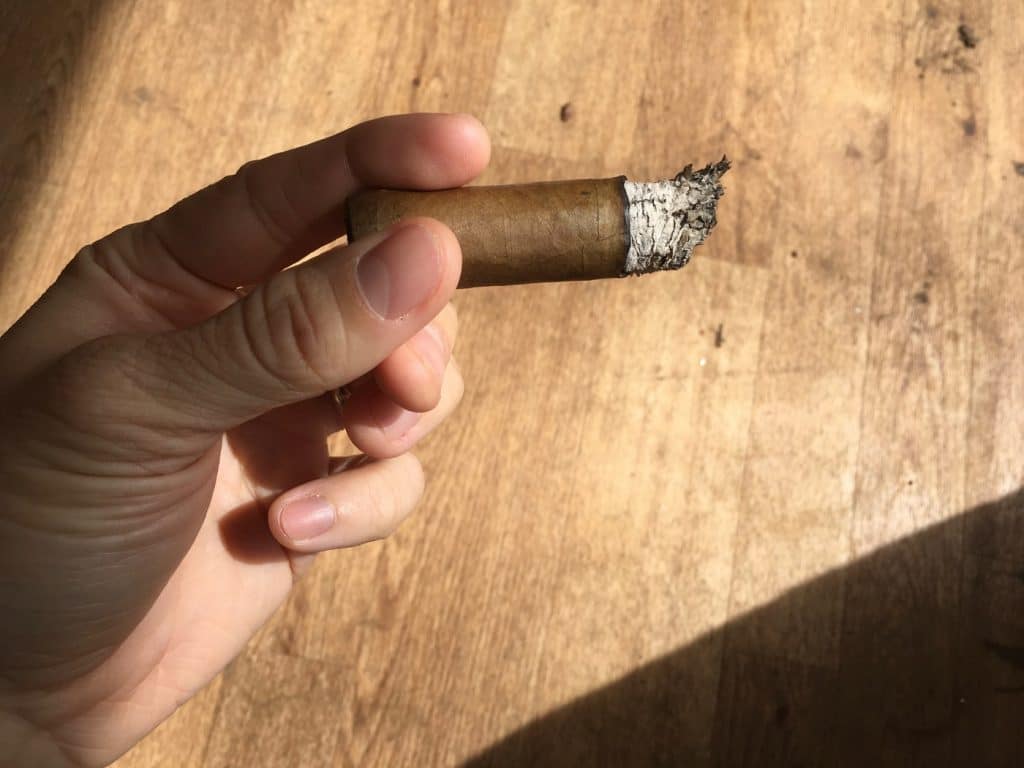 Though Monthly Clubs describes the Gilberto Oliva Reserva 550 as medium bodied, I found it to be on the light side. As always, I have a difficult time expressing cigar flavors, and I think comparing cigars to fruits or other dissimilar foods is a bit ridiculous. Tobacco is a leaf, and in this case, a leaf burning in my mouth.

Nonetheless, the smoke did taste a bit peppery with perhaps some hints of spice. As the cigar progressed toward the fifty-percent point, the flavors seemed to grow smoother and more mellow.

On passing the fifty-percent mark, however, the spicy flavors seemed to pick up and increase before mellowing out again after the seventy-five percent point. The flavors stayed pretty consistent throughout, varying only in intensity at different points in the cigar.

Overall, I found the flavor profile to be quite nice. The flavors were subtle and never too abrasive. Yet, they were not too subtle as to leave me questioning the point of the smoke. Overall, it was a mild smoke but not too mild.

It’s an excellent cigar and a near perfect light to medium bodied smoke.  Coincidently, this is the same rating Monthly Clubs gave it.

The opportunity to try a variety of high-quality cigars and to learn more about cigars in general through the accompanying tasting notes has been an invaluable experience for me. I have greatly enjoyed being a member, and I recommend giving it a try.

If you’re interested and would like to use my referral link, I would appreciate it. If you decide to sign up, I’ll receive a commission at no cost to you. If you’d prefer not to use my link, however, I still recommend the club. Just type to Monthly Clubs’ website to explore its offers.