Hold Your Nose and Vote for Trump

For the Never Trumpers, this may be the year to hold your nose and vote for Trump. 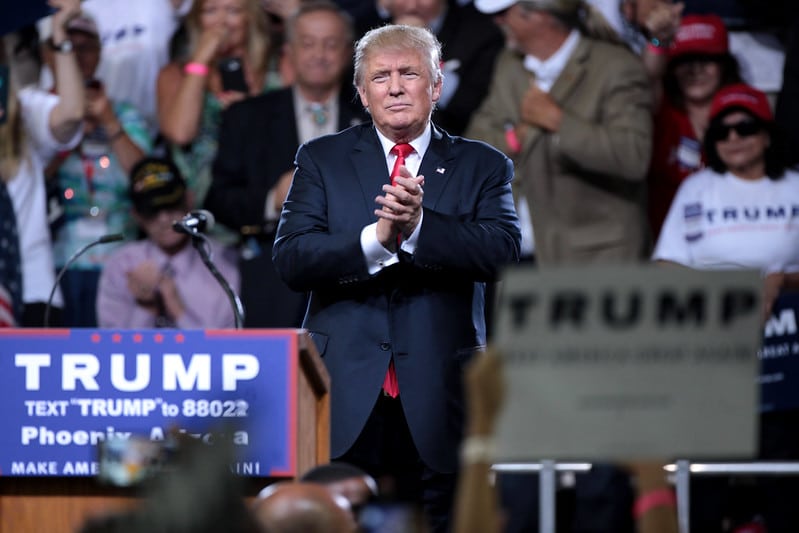 Photo by GPA Photo Archive is licensed under CC 2.0.

Trump is probably going to win this election. The fact that I am considering voting for him tells me that it’s likely. I didn’t vote for him in 2016, and I don’t want to vote for him this year either. Yet, I feel like I have been backed into a corner and have no choice.

Regrettably, this may be the year to hold your nose and vote for Trump.

Growing up, I spent my summers with my great-grandfather. He was a quiet, hardworking, poor man. He saw significant action in Europe during World War II, but settled into a simple life in rural Arkansas upon his return and never left.

He was a Democrat, the yellow dog kind from the South. He grew up hearing his grandparents talk about the Civil War, Reconstruction, and the Northern carpetbaggers. He despised the Republican Party.

Like many such Southern Democrats, however, he was relatively conservative and sometimes found himself at odds with the party when it drifted left. This struggle reached its zenith in his lifetime in 1972. This die-in-the wool Democrat just could not bring himself to vote for George McGovern. So, that year, he left his ballot blank.

Donald Trump was my George McGovern.

I am a conservative Republican. I voted for George W. Bush in 2004, John McCain in 2008, and Mitt Romney in 2012. I naturally assumed that I would vote for the Republican nominee in 2016 as well.

When Trump received the nomination, however, I just couldn’t bring myself to vote for him. Despite my strong misgivings about Hillary Clinton, on election day, I wrote in Jeb Bush.

For the first time in my adult life, this year I was open for voting for the Democratic presidential nominee. I maintained the belief that I could perhaps hold my nose and vote for Joe Biden and perhaps Pete Buttigieg. All the Democrats had to do was not be crazy, and they could have convinced an adamant conservative like me (and I’m sure many others) to support their nominee.

But this they could not do.

As the Democratic primary race has progressed, I have become convinced that there is no way I can support any of the candidates. As this realization dawned on me, I assumed I would throw my vote away again.

Now, however, I am unsure. If the Democratic Party chooses to nominate a communist sympathizer—whatever he may say about that label, Bernie Sanders honeymooned in Moscow, not Copenhagen—then I will vote for Trump.

Even if Joe Biden is the nominee, however, seeing the direction in which the Democratic Party is going, I may feel compelled to vote for Trump regardless. A Trump win may be the only way to help stem this tide in the Democratic Party and to ensure the appointment of judges that may eventually stand as the final check against a future expansionist government.

I, therefore, find myself considering voting for Trump, something I never thought that I would do. And I doubt that I am the only one in this situation.

Elites, the Coasts, and the Heartland

The cries from the left about Trump certainly don’t help its cause. When I hear people say things like, “No thinking person could fail to see that Trump is a racist,” or “Trump is a fascist,” it does not convince anyone. It’s condescending, and it angers people, even those who don’t support Trump.

As others have pointed out, Trump is a big middle finger from America’s heartland to the elites. They know the hatred people on the coasts have for them, and they’re tired of the condescension and vitriol aimed in their direction.

As a Southerner myself, I understand the pleasure they derive from angering the elites. Admittedly, in my baser moments, I derive it too.

Such elitist anger is particularly rife here at Yale. Yalies speak of conservatives as if they have never actually met one, and the evils of Donald Trump and conservatism in general are not matters for debate. They are simply assumed.

They do not see Trump’s election as merely one of a series of elections in the ordinary course of events, the back-and-forth outworking of a healthy democracy. No. They view it like Caesar’s crossing the Rubicon, a kind of national tragedy. Somehow to them, the way democracies die—a phrase I hear over and over again—is, ironically, by allowing people to vote.

Hold Your Nose and Vote for Trump

If people want to argue that the founders had it right in their original conception of the electoral college—that is, we should have a system whereby the most qualified among us select the President—I am all for having that discussion. That was the general manner in which we picked our first five Presidents, and they were universally excellent.

But that’s not what the left is arguing. Instead, it argues for changes that would allow the concentration of power into its power centers. Trump lost the popular vote, so now the elimination of the electoral college entirely is of the utmost importance, despite such a proposal having zero chance of becoming law.

So, this is where we are. Our parties have weakened themselves to the point where they have little control over the selection of their own nominees, and the people are left with two poor choices.

Given this reality, it may simply be time to hold your nose and vote for Trump.

With all the disagreement and debate currently raging within this country, I think most of us can agree that this whole thing is exhausting. I don’t know yet what I’m going to do, but the fact that I am even considering voting for Trump suggests to me that he will likely win.

One thing my liberal friends and I have in common, though, is that we all look with longing for the post-Trump era.

Maybe we could use this time to come together and agree to diminish the power of the Presidency, such that it matters much less who holds the office.

But I’m not holding my breath.