I recently sampled the Hoyo ICON Robusto, and I have provided my review below. This content uses referral links. 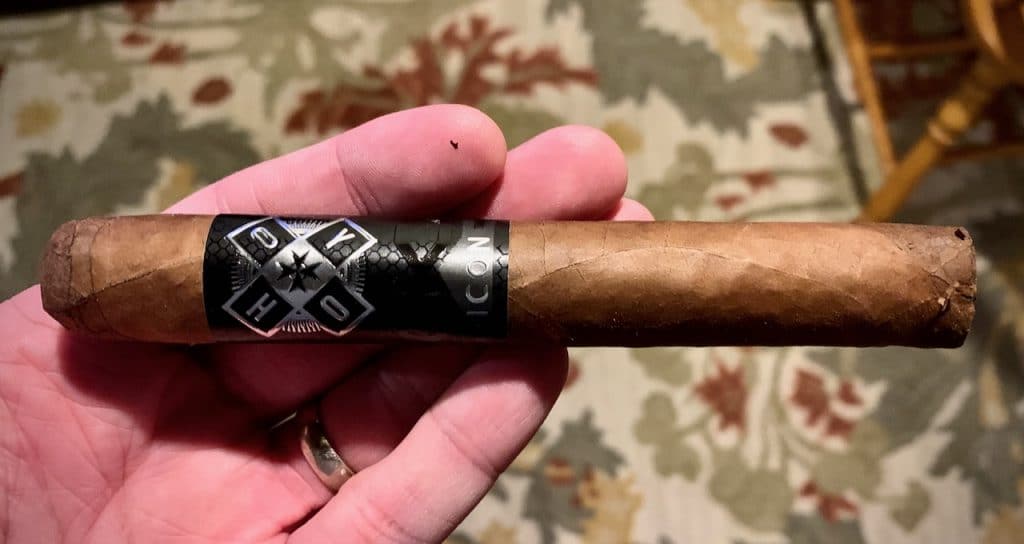 I recently had the opportunity to try the Hoyo ICON Robusto, a high-quality cigar included in a recent Cigar of the Month Club shipment. A Dominican cigar with Dominican leaf used in the wrapper, binder, and filler, it was a good, if not extraordinary, cigar.

As you can see in the photograph, the label was interesting. Plain, yet well done.

The cigar had a smooth appearance, but pieces of the wrapper were flaking off and appeared brittle in places. The condition of the cigar gave me a bit of pause. While it looked generally well-constructed, there were enough flaws to give rise to some concerns right off the bat.

The feel of the wrapper gave rise to similar concerns as the look and condition of the cigar itself. The feel was inconsistent with too much give in many places, leading me to believe that this particular cigar was not well rolled.

I have no real way of knowing if this was a fluke limited to my cigar or if such defects plague the entire brand. (Though, as I describe below, I believe it is the former.) Either way, this smoke got off to an ominous start.

The Hoyo ICON Robusto started to turn it around as I took in the wrapper’s aroma. Subtle, earthy, and with a hint of leather, the smell suggested a high-quality cigar. I consequently began to think that perhaps the flaws I indicated above were flukes particular to my specific stick.

There is always bound to be at least some level of inconsistency when things are handmade.

The cut of the Hoyo ICON Robusto was perfect. My cutter sliced through the cap quickly, removing it cleanly without compromising the integrity of the cigar. I had no issues here, and I began to think that, after my initial concerns, I was in for a good smoke after all.

The cigar lit up easily and smoothly. The foot took to the flame without much issue and lit up evenly without any trouble spots. In this area, the cigar was perfect.

The draw of the Hoyo ICON Robusto was similarly perfect. After lighting up, the draw was smooth and even, suggesting an ideal roll, which was hard to square with the issues I noticed before.

Perhaps I simply got an inferior leaf that did not travel well in the shipment, resulting in some brittleness and weakening, while still maintaining the effects of a quality roll.

The smoke’s flavor in the nose had a smooth and subtle earthy tone with a touch of spice. It was not overpowering and did not irritate my sinuses.

In this area, the Hoyo ICON Robusto was perfect.

The smoke was a delicious one. It was medium-bodied with an earthy flavor and hints of leather, cedar, and cream. (While Cigar of the Month describes a nutty flavor as well, I failed to discern this particular tasting note.)

The smoke was smooth and easy. While perhaps not the most delicious cigar that I have ever tasted, it is definitely up there.

Following the initial light, the Hoyo ICON Robusto had an earthy, perhaps herbal, aroma with what may have been a subtle hint of leather.

The burn wasn’t razor-sharp impressive, but the Hoyo ICON Robusto burned evenly throughout and required no effort to maintain.

The cigar’s ash maintained a solid construction throughout the smoke. I was never concerned about the ash’s drooping or falling off into my lap. In this area, the Hoyo ICON Robusto was perfect.

As I have written many times before, I know that this area is very subjective, and different people react to different cigars in different ways. For me, I don’t care for the “nicotine high” feeling that some cigars give me.

Nonetheless, I know that many cigar lovers enjoy that sensation. I, however, want a cigar that leaves me relaxed but nonetheless equipped to quickly move on to the next activity without the necessity for recovery time.

If you are one who likes that nicotine high, then the Hoyo ICON Robusto should be an A-rated cigar for you. For me, however, the slight high feeling left something to be desired, though, I will say, it wasn’t completely overpowering.

The Hoyo ICON Robusto did not spit out any loose tobacco at any time during the smoke. It was perfect. It even maintained complete integrity right after the cut and through the initial light, when free tobacco often reveals itself.

Overall, this was a good cigar, and I would consider buying a box, particularly given its great value. At just $4.17 per cigar in a box of eighteen at cigarinternational.com, it’s a great deal for the quality of cigar that it is.

As always, I recommend Monthly Club’s Cigar of the Month Club. You’ll get five premium cigars delivered to your door every month. (There’s also a more expensive Rare Cigar Club available, for those who are interested.)

The opportunity to try a variety of high-quality cigars and to learn more about cigars in general through the accompanying tasting notes has been an invaluable experience for me. I have enjoyed being a member for the past several years, and I recommend giving it a try.

If you’re interested and would like to use my referral link, I would appreciate it. If you’d prefer not to use my link, however, I still recommend the club. Just go to the Cigar of the Month website to explore Monthly Clubs’ offerings. 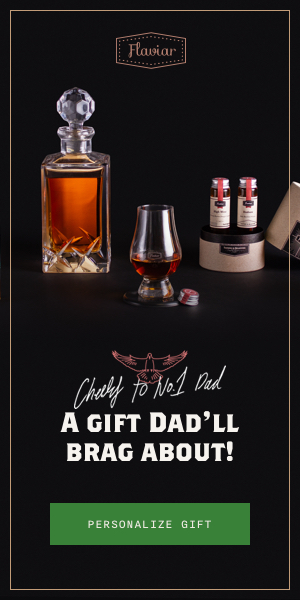