I recently had the opportunity to smoke the Kristoff San Andres Robusto. I have provided my review of it below. This content uses referral links. 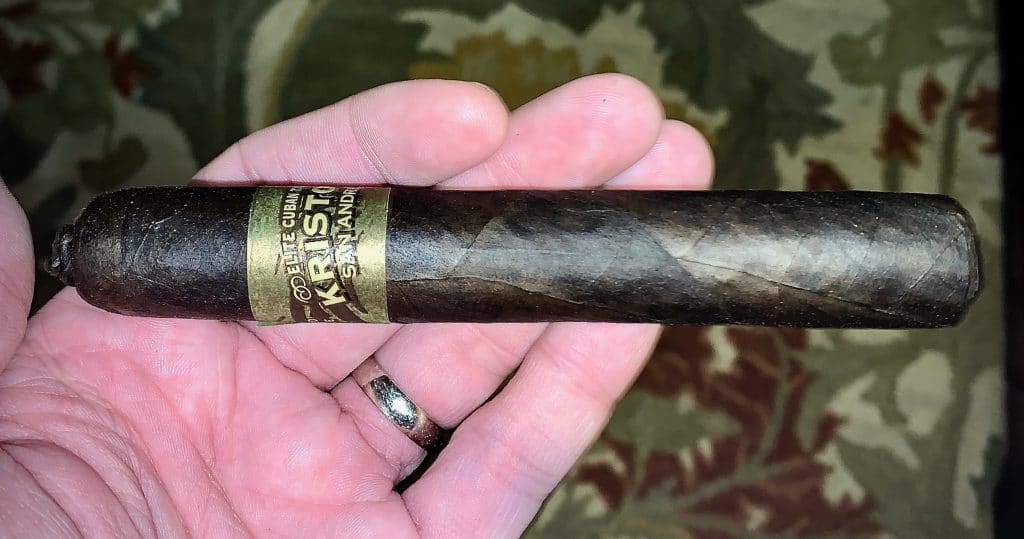 While Cigar of the Month recommends pairing it with Cognac, I forewent any drink pairing with my smoke, enjoying it in its most unadulterated form.

In my grading system and review, I have adopted the Cigar Journal: For the Discerning Aficionado method. Consequently, this review system differs a bit from previous cigar reviews that I have posted on this blog. Nonetheless, the result is about the same.

As you can see from the photograph, the label is simple but eloquent. While the look of the label is just that, a look, a nice label can nonetheless set the tone for the entire smoke and demonstrates the pride with which the company produced and released the cigar to the public.

Again, looking at the photograph, it is apparent that the company took great care in the construction of the cigar. The cigar’s appearance is nearly perfect with a nice oily sheen and clean, smooth construction.

The wrapper had a perfect feel. It was firm with just the right amount of give and bounce-back on the squeeze. There were no soft spots or air pockets. It was not too hard, either.

I kept the cigar perfectly humidified. (I use Bovida packs in my humidor.) So, the condition in which I smoked it represents the condition of the Kristoff San Andres Robusto as constructed, undiminished by poor storage or other issues beyond the manufacturer’s control.

The Aroma of the Wrapper

The pre-lit cigar had the intoxicating aroma of fresh leather. Everything about it was perfect and as you would expect from a top-shelf cigar, which the Kristoff San Andres Robusto most certainly is.

The cut was perfect. I was able to slice through the cigar without difficulty or fraying. No tobacco came loose as a result of the cut, and the integrity of the wrapper remained completely intact.

The Kristoff San Andres Robusto took to the flame easily and lit up quickly and evenly with little effort. Throughout the smoke, the cigar maintained a consistent flame. I never had to relight it, nor did I ever feel like the cigar was in danger of going out.

After lighting up, the Kristoff San Andres Robusto had an effortless draw. I never struggled to pull smoke through the cigar, making for a relaxingly smooth experience. Still, the draw did not pull out as much smoke as I like.

While this allowed for the maintenance of a smooth, even smoke without the overwhelming intensity that too easy a draw can produce, it did not allow the cigar to obtain perfection.

Excellent but not perfect.

The Flavor of the Smoke in the Nose

The Kristoff San Andres Robusto was mild enough that I was able to push the smoke out through the nose to appreciate the subtle flavor more fully without burning my nostrils.

The Flavor of the Smoke on the Palate

This cigar was medium-bodied with mild smoke. In addition, its flavors were distinct, but not overwhelming. I was able to discern chocolate, coffee, and perhaps leather. Cigar of the Month indicates additional tastes of spice and black pepper, but I was unable to recognize these flavors.

The lit cigar had a pleasant, subtle, smooth aroma. The smell of the Kristoff San Andres Robusto was not overwhelming or harsh. While the cigar’s aroma was not quite delicate or sweet enough to burn as incense, it was in that ballpark.

The burn of the cigar was nearly perfect. It was even and smooth throughout the smoke without any canoeing, unevenness, or ugly inconsistent burn rates. I never had to touch it up or even keep an eye on it. The burn line was razor sharp.

The ash was perfectly tight. I never had to worry about its falling off prematurely into my lap, demonstrating perfect construction.

Bodily Sensation From the Smoke

Each person’s reaction will vary here, so I recognize that this is one of the most subjective areas of my grading system. And, in fact, it can change for the same person from smoke to smoke. This, therefore, represents my own unique experience at this particular time.

This smoke started off perfectly and smoothly, leaving me relaxed and at ease. Toward its end, however, I began to feel that nicotine “high” often associated with stronger cigars. While it did not make me sick, I do not care for this sensation.

I understand that some people like this feeling. For those that do, the Kristoff San Andres Robusto may be nearly perfect. For me, however, I prefer a cigar that allows me to jump up and move onto another task and perhaps even smoke another cigar.

The Kristoff San Andres Robusto, however, did not allow for this. I needed a moment to recover.

As I have already noted above, this cigar was nearly perfectly constructed. Not a single bit of tobacco flaked off into my mouth throughout the entire smoke, even right after the cut. Even very well constructed cigars will often spit off a few odd flakes of tobacco after the cut.

The Kristoff San Andres Robusto did not.

Overall, this was an exceptional cigar, and I would consider buying a box. It’s a bit expensive—the cigar goes for $10.39 per stick in a pack of five at cigarmonthclub.com—but not unreasonable. The sensation with which the cigar left me was not to my liking, but it had been a couple of weeks since my last smoke. So, the next go-around may be even better.

I recommend the Kristoff San Andres Robusto, and I hope I have the opportunity to smoke one again soon.

If you’re interested and would like to use my referral link, I would appreciate it. If you’d prefer not to use my link, however, I still recommend the club. Just go to Monthly Clubs’ website and check it out.