I recently smoked the La Gloria Cubana Spanish Press Robusto, a decent cigar at a reasonable price. I have provided my full review below. This content uses referral links. 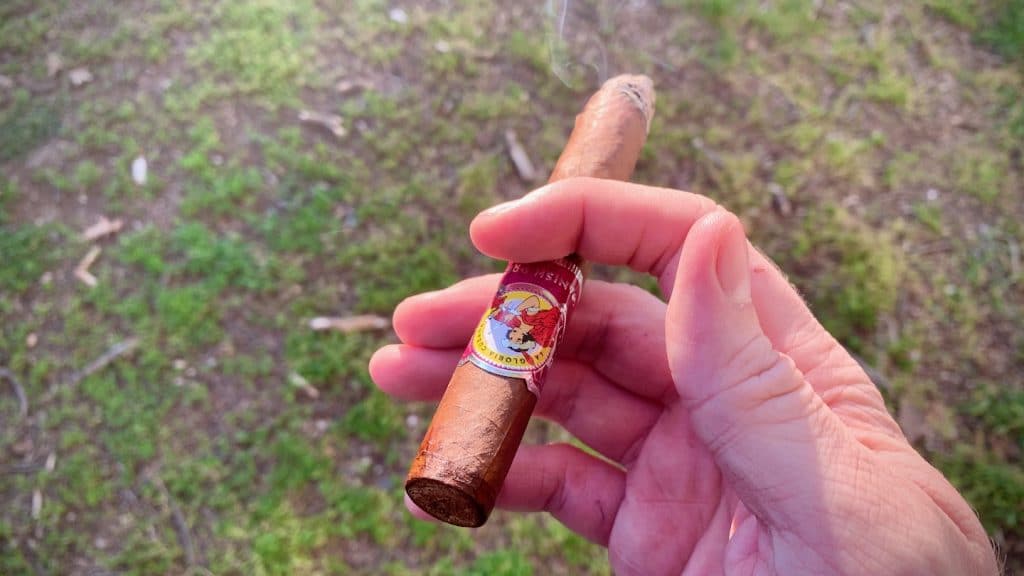 A recent shipment from Cigar of the Month included the La Gloria Cubana Spanish Press Robusto. This was a decent cigar at a great price.

Cigar of the Month recommends pairing it with a full-bodied cabernet. I had mine with a similar red wine, and the two went together well.

It took me about an hour to work through this cigar.

As the picture indicates, the label was eloquent. It was complex but not over the top.

This cigar’s construction was nearly flawless. It was a beautiful cigar with a rich, dark wrapper.

I found the cigar to be a bit too firm. There was not much give on the squeeze, leading me to fear there would be some issues with the draw. Fortunately, however, these fears did not bear out.

The pre-lit cigar smelled of cream and earth. It was nice but just a bit too subtle.

The La Gloria Cubana Spanish Press Robusto was a bit stubborn, but it eventually lit up fine.

The draw was perfect from beginning to end. It was smooth and effortless while still maintaining an appropriate amount of resistance.

On the retrohale, I picked up hints of earth and cream. It was smooth but nothing special.

On the cold draw, I picked up notes of earth and leather. After the light, I tasted hints of spice, leather, earth, and wood. It was a pleasant smoke, but there was nothing special about it. It was run of the mill for a premium cigar.

After the initial light, the cigar’s smoke smelled of leather and earth. The aroma was quite subtle, however, and just ok.

This cigar burned fine all the way through. It never caused me any problem.

I know that this is a bit of an odd category to consider. As the author of The Cigar Journal: For the Discerning Aficionado notes, however, if the best-tasting cigar in the world makes you sick, it’s not a great cigar for you. This area is, therefore, very personal. Some low-quality cigars will make most people sick. Still, when you’re talking about premium cigars, different people will react differently to different cigars.

This cigar showed itself to be well-made here. No flakes of tobacco found their way into my mouth at any point during the smoke.

Overall, this cigar was not overly impressive, but it was a good cigar, nonetheless. At $4.00 per stick, it’s also an excellent value.