I recently smoked the La Palina Blue Label Robusto, an excellent cigar that I have reviewed in full below. This content uses referral links. 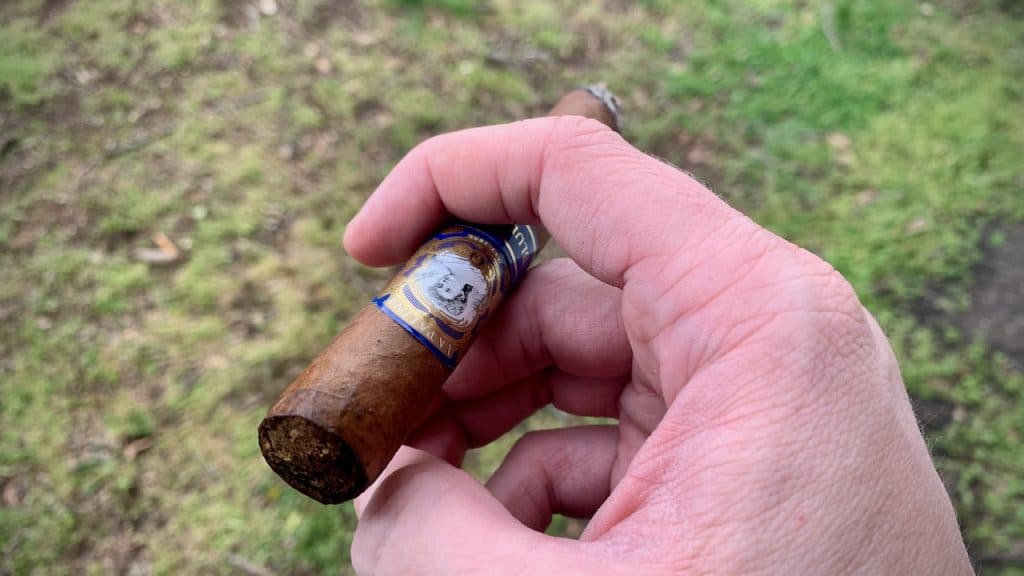 A Honduran cigar with a blend of Nicaraguan and Honduran fillers, a Habano binder, and a Honduran Habano wrapper, this was a medium to full-bodied smoke with a complex flavor profile.

Cigar of the Month recommends pairing it with a full-bodied highland scotch. As is my usual habit when tasting cigars, however, I enjoyed mine with a cup of coffee.

As the picture indicates, the label was well done. It was beautiful and eloquent.

This cigar came in good condition with some minor flaws. Its veins were more pronounced than I like to see, and there was some discoloration on the wrapper. Nonetheless, it was a good-looking cigar.

The cigar felt just as it should. If I had to nitpick and find a flaw, I would say that it was perhaps a bit too firm, but even that small criticism would be a stretch.

The pre-lit cigar smelled of nuts with hints of earth and a general sweetness. It was pleasant but not extraordinary.

The La Palina Blue Label Robusto lit up easily and without issue.

The draw was relatively good through the entire smoke, but I nonetheless found it to be a bit too tight. An easier draw would have made this smoke more enjoyable.

On the retrohale, the La Palina Blue Label Robusto had strong hints of cinnamon, which I found to be just a bit much. Later, I was able to detect traces of nuts and mint.

The La Palina Blue Label Robusto had hints of cinnamon and pepper. The flavor was pleasant, but a little overpowering for my taste.

After the initial light, the cigar smelled of nuts. The aroma was smooth and nonabrasive. The smoke smelled fantastic.

The burned started off just a bit uneven, but it quickly evened out. Once it did, the burn remained perfect throughout the remainder of the smoke. It burned evenly and consistently, and I never had to worry about its going out on me.

The ash was fine. It had a relatively good consistency, and I never had to worry about its falling off into my lap.

The La Palina Blue Label Robusto was a bit stronger than I like my cigars, but it did not affect me the way cigars of this strength sometimes do. Rather, it left me feeling mellow and relaxed.

The La Palina Blue Label Robusto showed itself to be well-made here. No flakes of tobacco found their way into my mouth at any point during the smoke.

Overall, this was a nice cigar. While not flawless, it was nonetheless extraordinary, and I enjoyed it from beginning to end. At $8.10 per stick, it’s not exactly a steal, but it’s not obscene, either.