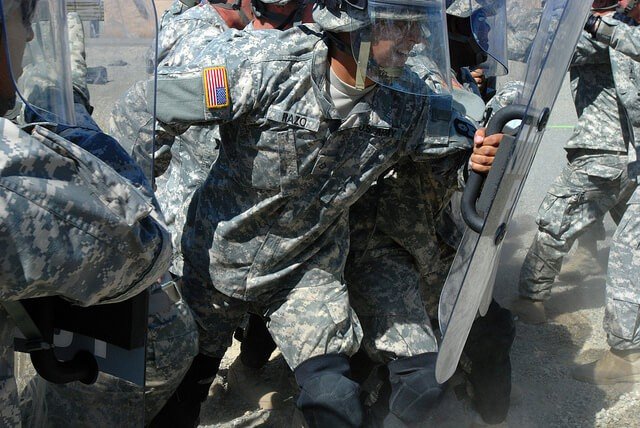 Photo by California National Guard is licensed under CC 2.0.

The legacy of Adolphus reverberates even today. The British system, after which the Continental Congress modeled its own Articles of War in 1775, was based heavily upon the Swedish articles of warfare. In turn, the Articles of War—with different articles for the Army and the Navy—adopted by the Continental Congress remained in effect until 1863. The unique challenges of the Civil War, however, necessitated revisions.

The original Articles of War did not envision American military engagements beyond the borders of the United States. Its purpose was to address military discipline during defensive operations geared toward homeland security, not to implement rules governing the conduct of an expansionary force.

Consequently, the articles addressed military specific offenses only—such as mutiny, desertion, and sedition—but failed to provide for traditional civilian offenses—such as rape and larceny. After all, if soldiers were only to operate within the borders of the United States, the civilian authorities could be entrusted with punishing the trespasses of civilian law by the soldiers within their borders.

With the secession of the southern states, however, the Union Armies were, in a sense, operating beyond their borders. Non-military specific offenses committed by soldiers in the South could be prosecuted only by southern law. The military code did not provide for a means to punish them, and the soldiers were beyond the jurisdiction of their home state in Union territory. (This was a time before an expansive federal civilian authority.)

This was obviously problematic. The vile behavior of Union soldiers could not go unpunished, but it was impracticable to prosecute civilian crimes under the jurisdiction of a state in open revolt. Therefore, Lincoln expanded the Articles of War to provide for a variety of non-military specific offenses under the jurisdiction of military courts, thereby allowing the military itself to prosecute lawless soldiers.

Beginnings of the Modern System

This system remained in place until the end of World War I. During the war, the number of people subject to military jurisdiction increased dramatically as a result of the draft. These new inductees, unfamiliar with military culture and customs, were not accustomed to the often novel provisions of military law—such as the prescription of floggings for various infractions.

As a result, there were a large number of complaints about the military system of justice, leading to the implementation of some reforms to Lincoln’s Articles following the end of the First World War.

With the advent of World War II came an even greater influx of new recruits and consequently an even greater straining of the military justice system. More people became subject to military law than ever had been before, providing an opportunity to expose and highlight some of the glaring weaknesses of the current system—specifically the lack of procedural safeguards for the accused. As a result, dramatic reforms were made following the war’s end.

Military Justice in the Modern Age

These reforms yielded the Uniform Code of Military Justice. Enacted by Congress in 1950 and put into effect in 1951, the UCMJ, with a few revisions—most significantly in 1969 and 1984—remains in effect today. While it includes vestiges of the Articles of War, its enactment marked a significant change from prior systems of military justice.

The Uniform Code of Military Justice governs the behavior of all members of the Armed Forces, including retired personnel, providing for the prosecution of military-specific crimes, common law crimes, inchoate crimes—such as attempt—and a variety of other types of conduct.

The UCMJ is the statutory expression of our currently military justice system, passed by Congress pursuant to its enumerated power to make rules for the Armed Forces as provided in Article I Section 8 of the United States Constitution.

The UCMJ is not, however, the only method by which Congress imposes its will upon the members of the Armed Forces. While Congress has the authority to pass separate statutes to govern the Armed Forces, it generally provides additional rules—usually annually—through the National Defense Authorization Act, or NDAA. While the primary purpose of the NDAA is to set the budgetary constraints of the Armed Forces, Congress often uses it to implement new rules—such as this year’s revisions to the UCMJ provisions addressing sexual assault.

In addition to Congress, military justice encompasses the orders of the President of the United States in his role as commander-in-chief. The most notable exercise of executive power within the military justice system comes through the Manual for Courts-Martial, which functions as the President’s executive order for—as the name suggests—the conduct of courts martial.

As a practical matter, the Department of Defense, through its Joint Services Committee, determines how to incorporate legislation into general military practice—which of course must be approved by the President through executive order. The President may also allow service secretaries to promulgate their own regulations for the operation of their respective branches.

This is a very general overview of our modern military justice system and how we got to where we are today. In future posts, I will discuss some specific aspects of our military code.

Spread the loveIn this post, I discuss my second week at JASOC. Please be aware that I am publishing this based on notes I took during my time at JASOC five years ago. Consequently, I Read more…