I recently smoked the Pumpkin by Privada Club, part of the Club’s Lost and Found collection. This was a fantastic cigar, and I have provided my full review below. This content uses referral links. 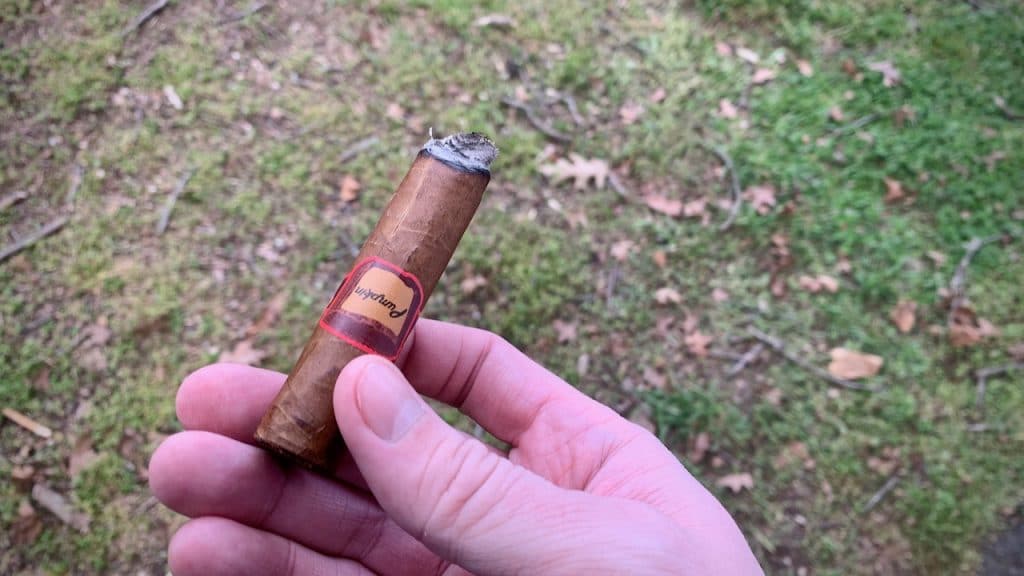 I recently purchased Pumpkin by Privada Club after seeing it offered for sale on its website. I love pumpkin anything really, so I was intrigued by the name and decided to give it a try.

This was a fantastic, solid A cigar all around.

A Dominican cigar with an Ecuadorian wrapper and Dominican fillers and binder, Privada club picked up these cigars from a prominent cigar company after they had aged twelve years. (It wouldn’t say which one.) Privada then repackaged them into the Pumpkin.

Privada Club recommends pairing the cigar with anything fall-flavored, such as a wheat bourbon, a pumpkin spice latte, or an amber lager. As is my usual habit when tasting cigars, however, I enjoyed mine with a good cup of coffee. They went together fine.

As the picture indicates, the label is interesting but understated. It works well with this cigar.

The Pumpkin by Privada Club was beautiful. Its coloring was perfect, and it looked like a tasty cigar. It did, however, have very thick and distinct veins, which led me to worry about the quality of the burn.

Fortunately, however, these fears did not bear out.

The Pumpkin by Privada Club felt absolutely perfect. It had just the right amount of give on the squeeze and bounced back quickly. It was also consistent throughout. The cigar was simply flawless in this regard.

The pre-lit cigar smelled terrific. It had a subtle aroma of wood with some candied sweetness that was distinct but understated. There was simply nothing here to criticize.

The Pumpkin by Privada Club lit up with just a little bit of difficulty as the foot of the cigar stubbornly resisted the flame for a time. Nonetheless, it eventually took to it and got started just fine.

The draw was simply perfect throughout. It had just the right amount of resistance without creating any difficulty or discomfort. It started off perfectly, ended perfectly, and was perfect at every stage in between.

On the retrohale, the Pumpkin by Privada Club was incredibly smooth. It was light and mellow in my sinuses, not causing the slightest bit of irritation. In fact, I was able to push an entire mouthful of smoke through my sinuses without any trouble.

I detected some spice in the flavor, but overall I was simply the most impressed with how smooth and mellow this cigar was.

The Pumpkin by Privada Club was sweet with the subtlest hint of spice. It was an incredibly smooth cigar, but, while I would say the flavor profile was nearly perfect, I found it a bit weaker than I like.

After the initial light, the cigar’s smoke smelled sweet but, at the same time, a bit musty. The aroma was not as pleasant as I anticipated after smelling the wrapper.

The burn started off evenly and stayed even throughout the smoke. It also burned consistently, not too hot but not too weak, either. It was simply perfect.

The ash was great. It wasn’t quite perfect, in that it did not have the elusive firm, long-lasting ash that I like, but it was pretty close.

The Pumpkin by Privada Club left me feeling relaxed and mellow, precisely what I want. Indeed, everything about this smoking experience was extremely relaxing.

The Pumpkin by Privada Club showed itself to be well-made here. No flakes of tobacco found their way into my mouth at any point during the smoke.

The Pumpkin by Privada Club was the mellowest smoke that I have ever had. Its age really showed, and it’s hard to describe how much I appreciated this aspect of this cigar. I felt like this deserved a bonus point. +1

I loved this cigar, and I did not want it to end. I smoked it down to the nub until it wasn’t possible to smoke it anymore. +1

This was an absolutely fantastic cigar. While I wouldn’t call it perfect, it was pretty close. At $15 per stick, however, it is a once in a while cigar at most. It’s a bit too pricy to become a permanent fixture in my humidor.

I recently stumbled upon Privada Cigar Club through an article in Cigar Aficionado. Every month, I receive three rare, aged, limited edition, or new and noteworthy cigars specially selected for me. (Privada Club uses a personal flavor profile I submitted when I signed up to help make its selections for me.)

Membership costs $25.99 per month plus shipping.

I’d encourage you to check it out. I’ve loved it so far—and the customer service is extraordinary. I’m not an affiliate, so I don’t receive any compensation if you sign up for the Club.

As always, however, I also want to recommend Monthly Clubs’ Cigar of the Month Club. I’ve been a member for years, and I absolutely love it. If you sign up, you’ll get five premium cigars delivered right to your door every month.

(There’s also a more expensive Rare Cigar Club available, for those who are interested. I haven’t tried the Rare Cigar Club, yet, so I can’t compare it to Privada Club.)

Privada is great for providing opportunities to try rare and limited-run cigars. Monthly Clubs’ Cigar of the Month Club, on the other hand, is excellent at helping you pick potentially lifelong favorites.

Note, however, that, while I am an affiliate of Monthly Clubs’ Cigar of the Month Club, I was a member for years before becoming an affiliate. So, I was a huge fan of this Club long before I began promoting it.

As a result, if you’d prefer not to use my link, I still recommend the Club. Just go to Monthly Clubs’ Cigar of the Month website to explore Monthly Clubs’ offerings.