I recently smoked the Punch Bareknuckle Belicoso, a high-quality cigar at a reasonable price. I have provided my full review below. This content uses referral links.

A recent shipment from Cigar of the Month included the Punch Bareknuckle Belicoso. This was a high-quality cigar at a reasonable price.

A Honduran cigar made with a mixture of Honduran and Nicaraguan long-fillers, a Honduran binder, and a dark Ecuadorian Habano Sun-Grown wrapper, this cigar exhibited the kind of quality I expect from Punch.

Cigar of the Month recommends pairing it with a Highland Whiskey. The closest thing I had on hand was the Johnny Walker White Walker Edition that I purchased through Flaviar. The two complimented each other perfectly.

It took me about an hour to smoke through this cigar.

The label was wrapped around the foot rather than in its usual location, so I had to slip it off before lighting up. This is the reason my picture above has no label. Nonetheless, the label was well-made and subtle, even if I don’t care for bands on the foot.

Below, I posted a picture of the label from my cigar journal. (I make it a habit of saving the bands and pasting them into my journal.) 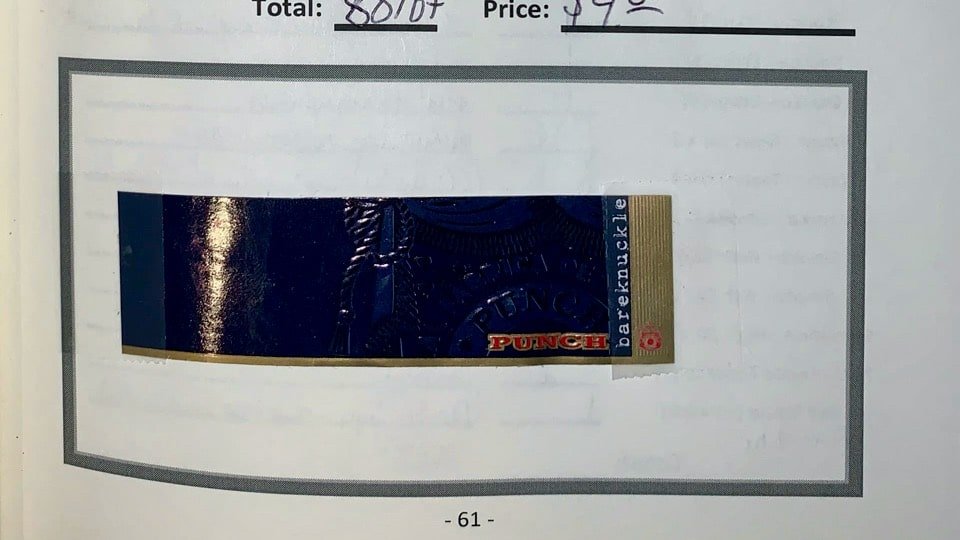 The Punch Bareknuckle Belicoso was well made. It was of solid construction with a beautiful oily sheen. It did, however, have very distinct seams that I don’t expect to see on the best-made cigars.

This cigar felt perfect all around. It was consistent and had just the right amount of give on the squeeze throughout. It was clearly an expertly rolled stick.

The pre-lit cigar’s aroma was a bit pungent, like vinegar. This vinegar smell overpowered everything else, making for a very unappetizing aroma.

The Punch Bareknuckle Belicoso lit up quickly and without issue.

The draw on this cigar was great throughout. It had the perfect amount of resistance that allowed for a relaxing, enjoyable smoke from beginning to end.

On the retrohale, the Punch Bareknuckle Belicoso had notes of pepper that were simultaneously very strong and smooth. I’m not sure how else to describe it, but it was very nice.

On the cold draw, I picked up very subtle hints of leather. After the light, the Punch Bareknuckle Belicoso had notes of leather, earth, and wood. It was an enjoyable smoke, but it was relatively plain. It certainly wasn’t anything to write home about.

After the light, the cigar’s smoke smelled of leather and earth. It was kind of bland, though, and therefore nothing special.

The burn started off just a little uneven, which is not atypical of premium cigars. It never did, however, even up, eventually requiring me to touch it up. I hate doing that because I often notice a subtle change in the flavor of the smoke when I have to put a flame to it for a second time.

The Punch Bareknuckle Belicoso left me feeling relaxed and mellow, precisely what I want.

The Punch Bareknuckle Belicoso showed itself to be well-made here. No flakes of tobacco found their way into my mouth at any point during the smoke.

Overall, this was a good cigar that I would happily smoke again. I’m not sure why the unlit wrapper smelled so horribly, but perhaps it was a one-off fluke. The flavors through the rest of the cigar did not match its initial unfortunate smell. At $4.00 per stick, it’s reasonably priced, and I might consider picking up another one.