In this post, I review the Tabak Especial Café con Leche cigar by Drew Estate. 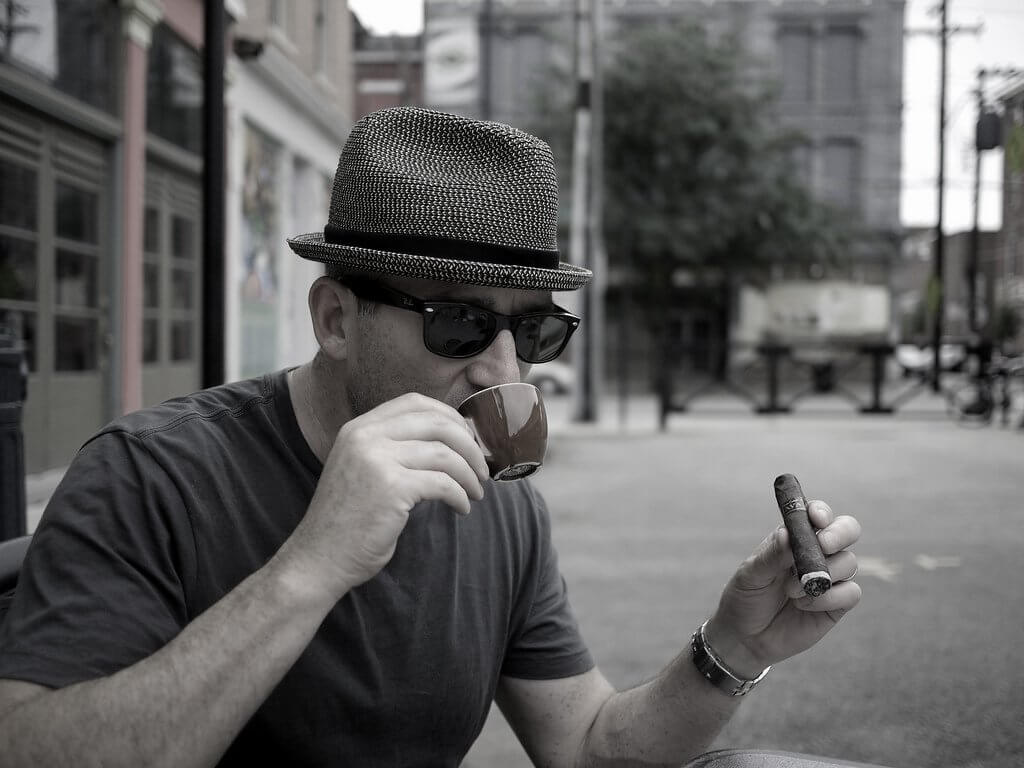 I’m a loyal subscriber to Monthly Club’s Cigar of the Month Club. I have been since June 2016. I can always count on five high-quality cigars being delivered to my door every month. It costs me $29.95 per month. (The subscription is $24.95, and shipping and handling is another $5.)

I subscribe to the Original Premium Cigar Club. Last year, Monthly Clubs introduced the Rare Cigar Club, which includes four cigars for $47.95 per month. I have not yet tried this, though I hope to do so soon.

I have been slowly working my way through them. In this post, I will review the Drew Estate Tabak Especial Café con Leche.

The Tabak Especial Café con Leche is one of Drew Estate’s infused cigar. I know Drew Estate by reputation, but I have never tried one of their cigars. I haven’t had a flavored cigar since college when I would occasionally purchase them from the gas station.

Drew Estate, however, makes flavor-infused handmade cigars with premium tobacco. The company has turned the stereotype surrounding flavored cigars on its head. (Their Acid cigars have gained quite the following.)

The Tabak Especial Café con Leche is an outstanding smoke, delicious in every sense of the word. It is a Nicaraguan, light-bodied cigar. With a Belicoso shape, 5.5-inch length, and a 54-ring gauge, it’s a medium-sized cigar, good for about an hour-long leisurely smoke.

This cigar was a unique experience all around.

Already distinctive for a premium cigar because of its infused flavoring, the Tabak Especial Café con Leche also had two wrappers. A dark Maduro wrapper encased the foot and head, and a light shade-grown Connecticut leaf covered the middle. 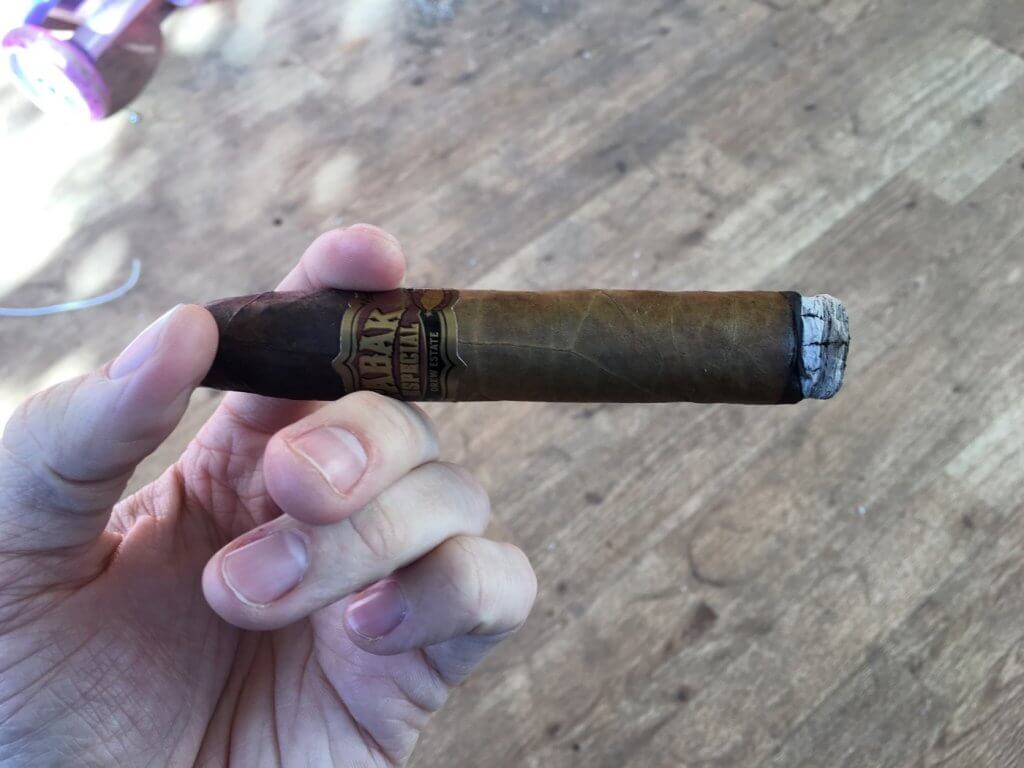 The Belicoso shape of the cigar is not my favorite. I like to punch a hole in the foot of my cigars, rather than cut off the cap. I find this the least obtrusive way to prepare the cigar. It usually allows for a sufficient draw while reducing the chance of damaging the wrapper. Few things can ruin a great smoke like a damaged cigar shedding pieces of tobacco into my mouth.

The Belicoso shape, however, does not allow for a punch. So, I had to pull out my guillotine cutter and slice off the cap.

It was difficult to identify where the cap ended and where the main wrapper began. Consequently, I was concerned about cutting off too much. My first cut was too conservative, resulting in a difficult draw.

I was therefore forced to cut a little bit higher up on the head. Once I did, however, the issues alleviated.

In addition, despite my cutting up a little higher than I would have liked, the wrapper held together nicely. I did not have any structural problems with the cigar at any time during the smoke.

The draw was perfect for almost the entire smoke. I did not have any issues with the draw until the end. That was, however, probably more an issue with the burn. (See below)

The wrapper had a sweet, fruity smell. I could not quite pinpoint the aroma, but it may have been grape. The cigar’s initial scent upon toasting the tip was also sweet, and the smooth sweetness persisted as I lit up.

I enjoyed this fruitiness infused into the Tabak Especial Café con Leche. It was a bit strong but not overwhelming. I liked the contrasting flavors of fruitiness with the smoothness of the tobacco.

Evenness of the Burn

The cigar lit up easily. The burn started perfectly but quickly developed some unevenness as the wrapper transitioned from the dark Maduro to the light Connecticut shade-grown leaf. This, however, promptly evened out again. The cigar then maintained a consistent burn throughout most of the smoke.

Slight unevenness did not appear again until I reached the seventy-five percent point. Even this unevenness was not dramatic, however, and the burn once again quickly recovered.

The ash was not the beautiful grey I like to see. It was, instead, an ugly white and black mixture. It nevertheless appeared relatively solid. This appearance was somewhat deceptive.

The ash fell off on its own—onto my shirt—after burning about an inch.

The burn rate was nearly perfect. It maintained a consistency throughout. This made for a very smooth smoke.

When I sat the cigar down between draws, it continued to burn light and even. I never had to relight it, nor did I feel obligated to puff heavily on it to keep it from going out. I was able to sip the cigar all the way through.

This continued until the end when the wrapper transitioned back to the Maduro leaf. At that point, the burn grew weak. It then became difficult to get a sufficient draw, and I had to fight to keep it lit.

Eventually, despite my efforts, the cigar’s flame extinguished. At that point the flavor had turned spicy and abrasive, so I let it die and discarded it.

As you can see from the picture, however, I had smoked the cigar near the nub. I would have liked to have gone a little further, but I was satisfied.

This was an excellent smoke. This premature end is the only flaw I found with the cigar, and it was a minor one at that. 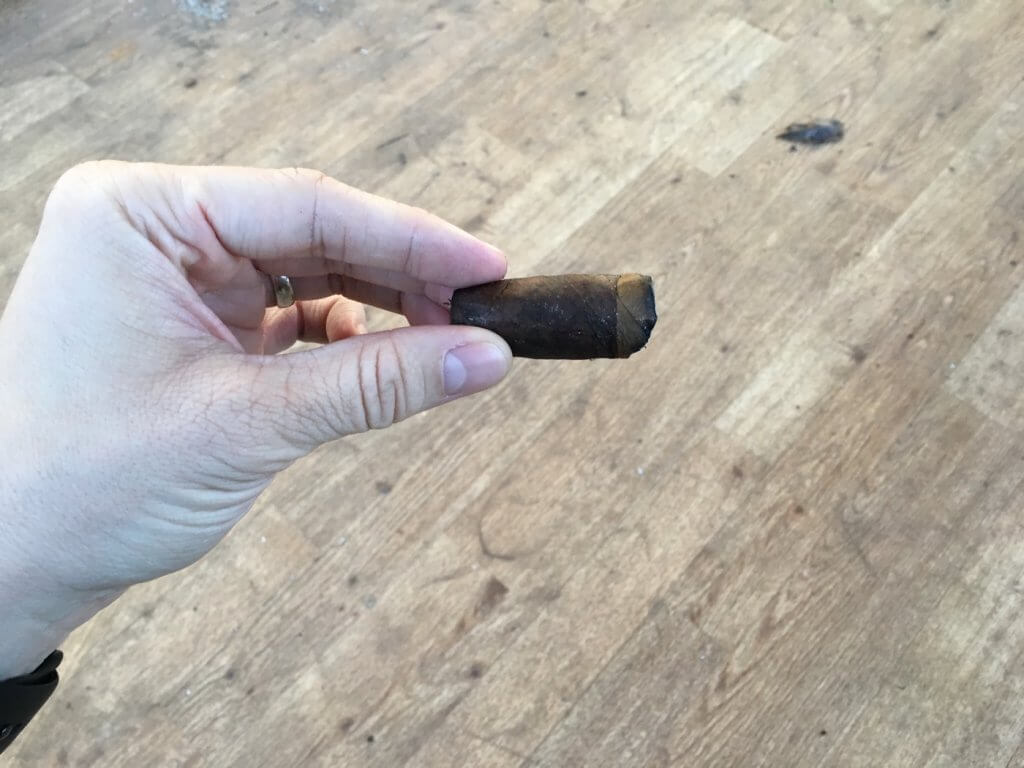 I always find describing a cigar’s flavor difficult. Descriptions of woodiness or leather never make much sense to me. I don’t expect my cigar to taste like my easy chair or other pieces of furniture. I expect it to taste like a cigar.

Nonetheless, each cigar has its own distinct flavor. The Tabak Especial Café con Leche is no exception.

The taste started out moderately heavy and perhaps a bit spicy in the beginning. This quickly changed into a very smooth smoke as the foot’s Maduro wrapped burned off. The flavor became almost empty and unnoticeable, albeit still enjoyable.

It grew spicy again as the smoke progressed, while simultaneously getting sweeter. Toward the end, as the Maduro wrapper reappeared, the flavors became rapidly stronger. Eventually, this cigar grew a bit abrasive, and I gave up.

The cigar is moderately priced. I was able to find it for about $7.15 per cigar online when you buy a box of 21.

In total, I rate the Tabak Especial Café con Leche cigar a 92.

The Tabak Especial Café con Leche is one of the best cigars I’ve had in a very long time. I may consider picking up a box. I highly recommend it.

As always, I recommend Monthly Clubs’ Cigar of the Month Club. I’ve been a member for years. If you sign up, you’ll get five premium cigars delivered right to your door every month.

Note, however, that, while I am an affiliate of Monthly Clubs’ Cigar of the Month Club, I was a member for years before becoming an affiliate. So, I absolutely love this Club.

Consequently, if you’d prefer not to use my link, I still recommend the Club. Just go to Monthly Clubs’ Cigar of the Month website to explore Monthly Clubs’ offerings.