Below is the writing sample I submitted as part of my successful application to Yale Divinity School. 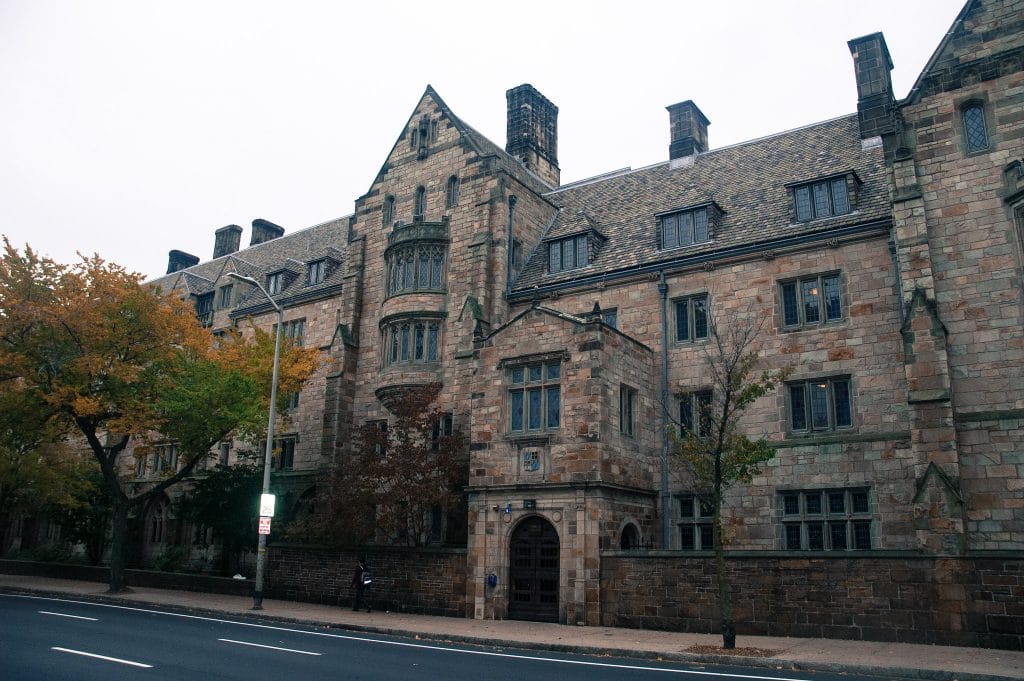 As I stated with my personal statement, I cannot attest to the quality of this writing sample. I do not know whether I got into the program in spite of it, as Yale did not provide me with any feedback in that regard. So, consider that as you read my writing sample.[2]

Yale’s website indicates that the writing sample should “illustrate[] the applicant’s ability to analyze and argue on a particular subject of his or her choice (a portion of a senior thesis or term paper is acceptable.)” The instructions on my application, however, provided that those who have been out of school more than seven years had to draft a new writing sample. Perhaps this will be different in future years.

For those unable to provide a writing sample from prior work, Yale provided three prompts from which to choose. I chose the following prompt for my writing sample.

Discuss the influence of a significant philosopher, theologian, or writer on the history and development of religious thought.

I can’t remember what the other prompts were, and I would image they change regularly.

I chose Greg Boyd as the influential theologian. (I wrote my honors thesis in college on open theism, so I was very familiar with this work.)

My writing sample is copied in its entirety below, modified only where necessary to make the format acceptable for a webpage. I provided a completely unmodified pdf copy at the end, for anyone so interested.

Through his scholarship and popular outreach, particularly with regard to his work on open theism, Boyd has built a bridge for evangelicals who wish to maintain a belief in the traditional tenants of their faith while simultaneously questioning the ardent position on scriptural inerrancy that has become the shibboleth of evangelical culture.

In 1994, a handful of evangelical scholars published The Openness of God, a work questioning classical presuppositions about divine sovereignty and foreknowledge and pushing open theism forward as a hot topic of debate within evangelical circles.[3]

At issue in this debate are biblical passages testifying that God changes his mind, experiences regret and surprise, and hopes for a future that does not come to pass.

The debate became so emotionally charged that the Evangelical Theological Society—despite having just two doctrinal qualifications for membership, neither of which mention divine sovereignty or foreknowledge[4]—brought to a vote a motion to remove Clark Pinnock and John Sanders from its membership rolls.[5]

Before the vote, Boyd wrote an article in the Journal of the Evangelical Theological Society defending open theism as a viable theological system consistent with evangelical theological presuppositions.[6]

Boyd is at the forefront of the debate among evangelicals interested in the subject due to his persistent involvement in controversies attracting widespread attention,[7] the plethora of books and articles he has published[8] (many with a popular bent[9]), his position as a megachurch pastor,[10] and his appearances in popular secular media outlets, such as the New York Times[11] and CNN.[12]

Boyd’s attempts to bring his message beyond the academic community to everyday believers have compounded his influence on evangelical thought.[13]

Explaining scriptural teaching in a consistent, coherent form is vital to a faith tradition that revolves around the Bible as the ultimate guide for faith and practice.[14] For this reason, Boyd’s claim to take scriptural teachings about the divine nature seriously helped secure open theism’s place within evangelical thought.

In his writings, Boyd, building on the works of other scholars, such as Terence Fretheim,[15] attempts to explain these passages in light of related philosophical questions, such as whether God foreknows free acts before they take place and why God would create evil individuals, like Adolf Hitler, despite foreknowing the future atrocities they would commit.[16]

The traditional understanding of God’s foreknowledge dictates that every event that has ever taken place or will ever take place in creation has existed as a settled fact from all eternity. God, therefore, possesses knowledge of future events as certain as his knowledge of past events. Hence, any knowledge that God might have of possibility exists as “might have been, never as what might be.”[17]

Boyd, however, questions these teachings, influencing the way a generation of evangelicals thinks about God. He argues that, while God is omniscient, the future consists of both certainties and possibilities and, consequently, some aspects of the future remain unsettled—or open—even to God.[18]

God’s omniscience, therefore, supplies God with knowledge of both settled events as settled and unsettled events as mere possibilities, such that God does not know all aspects of the future with certainty before they come to pass.[19] The theory has proven both intriguing and controversial—as the debates surrounding the subject at the Evangelical Theological Society show.

Boyd’s influence, however, extends beyond open theism. His Myth of a Christian Nation[20] and sermons leading up to its publication thrust him into the national spotlight as an important voice regarding the role of evangelicals in the American political landscape.[21]

He has also been a source of renewed interest in the Christus Victor atonement theory among evangelicals.[22]

Recently, he has waded into the issue of biblical violence and the trouble it creates for evangelicals and their often inflexible view of scriptural inerrancy. In his Crucifixion of the Warrior God, Boyd argues that believers should interpret passages of divine-ordered violence in light of the act of divine sacrifice on the cross, thereby creating some flexibility in biblical interpretation that is atypical within evangelicalism.[23]

Unlike other great theologians throughout history, such as Augustine of Hippo or Karl Barth, it is too early to determine the lasting power of Boyd’s influence on the development of religious thought. He is a contemporary and continues to produce works.

Through his writings, Boyd has shown another way to those believers who take the tenants of their evangelical faith seriously—the literal bodily resurrection of Jesus, the divine inspiration of Scripture, the importance of a personal relationship with God[24]—but wish to use the Bible as a guide for faith and not a tool for politically-charged ideological fights or a controversial flashpoint in the debate between religion and science.

Boyd has provided a scholarly basis for interpreting Scripture more freely, for engaging with broader society with mercy and humility, and for emphasizing Christ as the interpretive lens through which to interpret the Bible.

His teachings about God and Scripture emphasize a dynamic, relational model between God and the world at a time when evangelicals are struggling with their identity within the wider Christianity community and within American society as a whole. As a result, his influence will likely remain imprinted in evangelical circles as the movement continues to evolve.

[1] Based on my understanding of the instructions, I may not have been able to submit any work from law school anyway. Legal briefs were not allowed, but I was unclear whether the note I had written for law review would have been acceptable. It was a moot point for me, as the time had expired, but I probably would have sought clarity had I graduated law school more recently.

[2] While it should go without saying, I provide this in an effort to be helpful. Seeing as my writing sample is now posted to the internet and publicly accessible, it would be unwise to plagiarize it.

[3] Clark Pinnock et al., The Openness of God (Downers Grove: InterVarsity Press, 1994). Some of the information and research found in this paper were borrowed from Richard Garrett Ham, Jr., “A Scriptural and Philosophical Evaluation of the Open Model of God as an Ontological Necessity and Its Compatibility with Evangelical Theology” (undergraduate honors thesis, Ouachita Baptist University, 2007), accessed December 4, 2018, https://scholarlycommons.obu.edu/cgi/viewcontent.cgi?article=1045&context=honors_theses.

[4] “About the ETS,” The Evangelical Theological Society, accessed December 4, 2018, https://www.etsjets.org/about. “The Bible alone, and the Bible in its entirety, is the Word of God written and is therefore inerrant in the autographs. God is a Trinity, Father, Son, and Holy Spirit, each an uncreated person, one in essence, equal in power and glory.”

[9] See, for example, God of the Possible (Grand Rapids: Baker Books, 2000); Is God to Blame: Moving Beyond Pat Answers to the Problem of Evil (Downers Grove: InterVarsity Press, 2003); Cross Vision: How the Crucifixion of Jesus Makes Sense of Old Testament Violence (Minneapolis: Fortress Press, 2017); Repenting of Religion: Turning from Judgment to the Love of God (Grand Rapids: Baker Books, 2004).

[14] Clark Pinnock, who helped spark the open theist movement, played to evangelical fears of Christian “liberalism” when, in his defense of open theism at the Evangelical Theological Society, he stated, “You have just made a very liberal move…You have constructed your belief from philosophy first and only second checked it with Scripture.” “Editorial: God vs. God,” Christianity Today, February 7, 2000, https://www.christianitytoday.com/ct/2000/february7/30.34.html.

[19] Despite Boyd’s effort to maintain his belief in divine omniscience and divine omnipotence—insisting, for example, that God alone determines what aspects of the future to leave open and what aspects to settle—the reaction to Boyd and other proponents of open theism has been intense. (Often a theologian’s influence is compounded by the reaction he or she evokes. After all, the Council of Nicaea would likely not have occurred but for Arius nor Trent but for Martin Luther.) Paul R. House, for example, has argued that “American Christianity is currently engaged in a crucial debate over the doctrine of God” and that “nothing less than the biblical, orthodox doctrines of God and of salvation are at stake.” Paul R. House, “Introduction,” in Who Will Be Saved? Defending the Biblical Understanding of God, Salvation, and Evangelicalism, ed. Paul R. House and G. A. Thornbury (Wheaton: Crossway Books, 2000), 15.

[23] See generally Boyd, Crucifixion of the Warrior God, supra, note 8. In contrast, consider the Chicago Statement on Biblical Inerrancy, which takes a more ardent view of biblical interpretation and inerrancy. Article XII, for example, even affirms ancient presuppositions about the natural world found in Scripture, denying that “scientific hypotheses about earth history may properly be used to overturn the teaching of Scripture on creation and the flood.” See “Chicago Statement on Biblical Inerrancy,” 1978, quoted in J. I. Packer and Thomas C. Oden, One Faith: The Evangelical Consensus (Downers Grove: InterVarsity Press, 2004), 49.

BTFO (Before the Fall Orientation) at Yale The Achievement of Chalcedon

Spread the loveIn this post in my series “God and Man at Yale Divinity,” I share my paper on the Council of Chalcedon. It was my final paper for the History of Early Christianity class Read more…

The Mother of Jesus as a Named Source in John

Spread the loveIn this post in my series “God and Man at Yale Divinity,” I share my paper on John 19:26-27, which discusses the importance of the Mother of Jesus in the Gospel of John. Read more…

Spread the loveIn this post in my series “God and Man at Yale Divinity,” I share my paper on Hellenistic Christianity, otherwise known as Eastern Orthodoxy. It was my final paper for the World Christianity Read more…