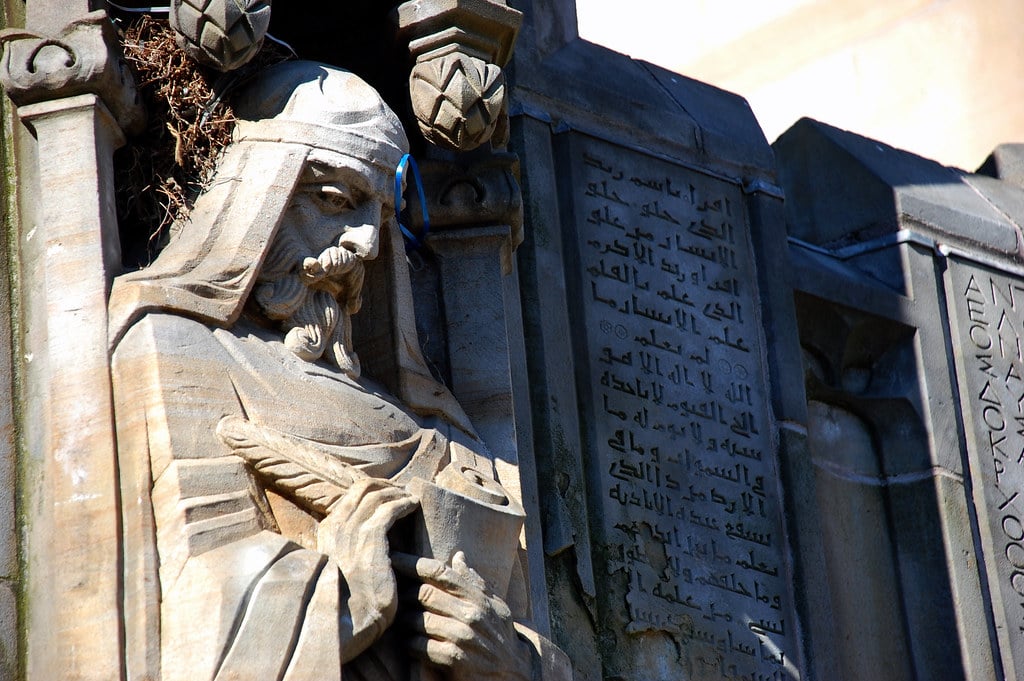 I just finished my fifth week at Yale. As I grow used to the environment here, I am beginning to search for my place in this community as one of the few conservatives at Yale Divinity School.

As I write this, I do not know of any other students who would identify as conservative or evangelical, but I have to believe they’re out there somewhere. There is an Evangelical Fellowship group, but I understand that it’s small. Besides, at a place like this, evangelical does not necessarily mean conservative.

I previously wrote about the daily services at Marquand Chapel. They are a significant part of the community rhythm here, and I had intended to attend daily.

I have not, however, attended a Marquand Chapel service since classes started. I went most days during orientation, but I just haven’t been back since. I don’t feel like I have the time.

More than that, though, it is exhausting for me. I am one of a few conservatives at Yale Divinity. While I doubt many evangelical leaders would allow me the term, I still consider myself an evangelical.

The Advantage for Conservatives at Yale Divinity

As one of the few conservatives at Yale Divinity, I am continually being challenged in the most intimate and crucial area of my life: my faith. I must say, however, that I love it. That is one of the reasons that I chose Yale.

I wanted to be challenged and stretched and forced to confront what areas of my belief systems need revision. I want to strengthen those beliefs that are valid and abandon those that are not.

In short, I chose Yale on purpose. Because of this constant crucible in which I find myself, I am starting to believe, in a way, that conservative students get a better education at Yale than liberal students. Strength comes in challenging interaction.

At the same time, these interactions develop kindness. Spending large amounts of time with people who think differently than I do forces me to get to know them as people. I am, therefore, able to build friendships with them. This prevents the toxicity of polarization that is so common today.

It’s much more difficult to hate someone you know personally than it is to hate a stranger. It’s hard to make generalizations and form stereotypes about a friend.

The Challenge for Conservatives at Yale Divinity

I do not fit that mold. Having to confront that constantly is rewarding, but it is also exhausting. So, with the constant state of tension in which I find myself at Berkeley, adding Marquand on top of it is just too much right now. I’d rather spend that time studying. As busy as I am, every minute is precious.

Perhaps I will venture back to those services again soon, but I need time to adjust to the environment here. These types of experiences prompt a lot of questions. Occasionally, I need some time to process through them before going to another place where more questions will be asked.

The academics here, however, have not presented any difficulty for my conservative faith. I understand it has for others in similar situations both at Yale and elsewhere. I hear that as a constant refrain, the trope of evangelicals losing their faith in college/seminary, etc.

I still do believe that Scripture is inspired. But I believe God does most things in such a way that we can only find his fingerprints if we really look for them. Just as God answers prayers for rain in a scientifically explainable manner, so he gave us Scripture through the ordinary means of producing works in the ancient world.

Consequently, historical “errors” or distortions, scientific misunderstandings of the universe and physical laws, contradictions and tensions between different authors and editors, and human messiness in general does nothing to undermine my view of Scripture or my belief in its reliability for instructing us in our faith. That is its purpose, not to tell history or explain science.

This is true even if it requires a bit more work to interpret Scripture than if we simply assume it fell from heaven. Coming to this point, while perhaps requiring me to redefine some aspects of my faith, did not require me to redefine the faith itself.

Conservatives at Yale Divinity and the Tension of Progressivism

At Yale Divinity School, however, some aspects of what I encounter seem to want to redefine the historical faith according to modern cultural mores. (Many of the services I have attended here seem more like a Democratic Party rally than a worship service.) I spend a great deal of mental energy working through that and the implications it might have for me and my faith.

But there’s a limit for me. Sometimes I just need to remove myself from it to focus on the academics. So, that is what I do.

The Awe-Inspiring Nature of Yale

Even as one of the few conservatives at Yale Divinity School, the fact remains that I am grateful to be here every day.

Being on campus at Yale can be a bit overwhelming at times. I am sometimes dumbfounded by the realization that I am standing on the campus of one of the most storied institutions in the world. This school is older than the United States. Some of our country’s—and the world’s—greatest men and women have walked these grounds and been educated in these halls.

I still have a hard time accepting that I’m actually here, that I live in New Haven, that I go to Yale. The glitter and awe and prestige of this place that was so prominent and overwhelming in my mind as I was growing up, as I applied, as I visited, and indeed, even as I showed up for the first day of class often fades away in the everyday, in the routine.

But there are times when I step back and realize that I am actually here, that I am a student at one of our country’s legendary institutions. When I do, I cannot help but be extraordinarily grateful.

On Wednesday of this week, Berkeley had its matriculation service. It was a full Eucharistic service that celebrated the matriculation of the incoming class. At one point during the service, all the new students matriculating into the Berkeley program, including myself, went forward and signed our names in the book, the matricula.

After that, we had the usual Wednesday night meal down at Berkeley house. So, we walked down there from Marquette Chapel, where we had the service.

My worship team is running worship next week, which means that we were responsible for washing the dishes after the meal last night. So, I helped wash dishes from about 8:00 until 9:00. Then I was finally able to go home after a very long day that had started with morning prayer at 7:30 am.

During lunch on Tuesday, there was a presentation on Clinical Pastoral Education or CPE. These are ministry opportunities that are generally conducted in hospitals with the hospital chaplain over a summer. I understand that it counts as a supervised ministry, which is a requirement for the Master of Divinity.

CPE itself, however, is not actually required for the Master of Divinity degree, though they do recommend it for those who are considering a career in ministry, which I am not. The Berkeley program, however, does require it.

Interacting with Professors at Yale

As you would expect, Yale attracts some of the most talented people in their fields. That was no surprise to me. What has been surprising, however, is how much most of the professors seem to care about the students.

This week I had lunch with my Intermediate Greek professor. While not required, she expressed an interest in having lunch one-on-one with all the students in her class. I had my day this week.

It was indeed a privilege. She provided me with a lot of great advice, particularly about preparing for Ph.D. work and securing employment afterward.

I had suspected learning Latin would be a good idea. I may now also try to take classes in Coptic and/or Syriac during my time here as well. In addition, I have to learn French and German, and I should probably attain a near fluency in the latter.

She also suggested that I leverage my legal background into something that may make me stand out. I had never considered that. If I can find a class in the history department or at the law school covering Roman Law, that would be invaluable.

I’m sure there is plenty of potential research into how Roman law interacted with New Testament writings, and my legal background could help me with that. That seems like a rich vein I would never have considered tapping but for her advice.

Teaching at the University of Arkansas

This week, I received an offer to begin teaching a class at the University of Arkansas, starting in mid-October. I have been on the adjunct faculty list since July, but this is the first class that I will actually teach.

Of course, the class is entirely online, so I can teach it from up here in New Haven. It does, however, add some more to the workload, so things are getting quite busy up here. Nonetheless,  I am excited about the opportunity to begin teaching, as that is what I want to do long term.

I hope that this post has been helpful. When I was preparing to come to Yale, I could not find much information about conservatives at Yale Divinity School and how they navigate this environment.

I’m sure that I will continue to write about being one of the few conservatives at Yale Divinity. I hope that will be helpful for students of similar persuasion who are considering coming here.

At the same time, I hope that my writing is helpful to those of a wide variety of theological and political persuasions considering Yale. I believe viewpoint diversity among the student body is vital to achieving the best possible educational experience.

If you’re interested in applying to Yale Divinity School, I encourage you to begin your application here. You can also request additional information from the YDS website.

If you would like to support the work of Yale Divinity School, please consider making a donation to Yale here.

If you have any questions about Yale Divinity School, please feel free to email me at [email protected]. I obviously speak for myself, not for Yale, but I would be happy to assist however I can.

Week 4 at Yale: Appreciating the Authority of Community

Spread the loveIn this post in my series “God and Man at Yale Divinity School,” I discuss my seventh week in Yale’s M.Div. program and my struggle with the issue of scriptural inerrancy. Photo by Carson Read more…

Week 4 at Yale: Appreciating the Authority of Community

Spread the loveIn this post in my series “God and Man at Yale Divinity School,” I discuss my fourth week in the M.Div. program and reflect upon the authority of community in religious life.  Photo Read more…