Enough with the Deference to the Military

In this post, I discuss faux deference to the military and how it has warped the ability of military personnel and veterans to interact with society. 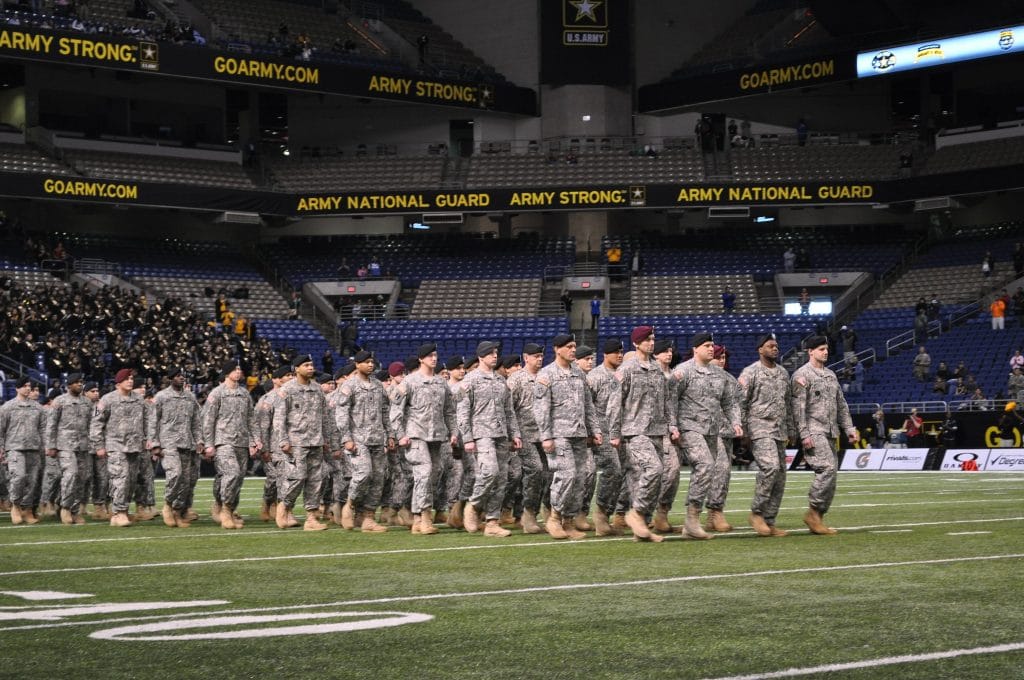 Photo by The U.S. Army is licensed under CC BY 2.0

There is a Vietnam-guilt syndrome that permeates our society, and it has yielded an aura of faux respect for the military. You see it in the military discounts at restaurants and the way those who criticize American foreign interventions avoid criticizing actual military personnel.

This societal pathology is not all bad, but there is something disingenuous about it. I remember feeling it when people would thank me for my service when I was in uniform. There was something formalistic, almost ritualistic about these encounters. Those people didn’t know me or whether I had earned their gratitude.

The public has an awkward relationship with the military. The clumsy interactions between troops and civilians and the kid gloves with which the public treats the military create a chasm between the two that is perilous to the long-term health of a society.

So, I think it’s enough with the deference to the military, particularly in the artificial form commonly appearing today. As I have written about before, the development of a separate warrior class has hindered the ability of policy-makers to effectively and ethically utilize the military and the capability of the public to hold its leaders accountable therefor.

Progressives, particularly those hailing from among the elite, don’t care about the military, don’t appreciate its personnel, and are generally indistinguishable in this regard from their predecessors in the 1960s and 70s.

The Vietnam-guilt syndrome has, however, affected them as well. Rightfully so, given that they were the primary culprits in perpetuating the abuse against our returning soldiers. (Veterans were not wiping conservative spit off their faces.)

The societal backlash muzzled such outlandish attacks against the individual soldier, such that, in this one area, progressives, even progressives on elite college campuses, are cowed into keeping their mouths shut and their attitudes on the subject to themselves.

(Those who violate this social norm, however, are not ostracized in the same way as, for example, someone violating mores on race or sexuality would be, as a recent incident at Yale demonstrated.)

For liberals, it is best to ignore the military and to speak in generalities on foreign policy. The “I support the troops but not the war in Afghanistan”-type expressions become common refrains, as do attempts to frame arguments in pro-military terms (e.g., “Bring our troops home,” etc.)

These demonstrations of respect, however, are not real. It’s easy to see through them. Such disingenuousness becomes particularly apparent when liberals attempt to use the military against a political rival, as the Washington Post did in its recent article attacking Trump for calling the military brass “losers.” (See my previous post.)

The attempt was to frame Trump as anti-military and to act as though the President had violated the honor of the military by insulting senior brass whose names were likely unfamiliar to the bulk of the Post leadership, if not the editorial board itself.

This is a false deference to the military.

Conservatives are not immune to this phenomenon. They’re just different—their understanding of patriotism results in their giving deference to the military, even where it is undeserved.

The way conservative media outlets have treated Lieutenant Colonel Vindman is a good case in point. Criticizing a particular member of the military is not the same as criticizing every military member. This overt deference is inappropriate and condescending as if members of the military must be protected from criticism.

I think this springs from a different kind of guilt than that which affects progressives. Conservative culture pushes a more old-fashioned sense of tradition and love of country, but few conservatives have served themselves.

For all their patriotic talk, I think many feel a sense of guilt about not serving in uniform. They exorcise this guilt through acts of contrition at the altar of military service.

The deference, at least at this level, is suitable for neither the country nor the military. It creates a sense of entitlement within the military and pushes the civilian population to hold troops at arm’s length. These tendencies reinforce one another, thus worsening the situation.

Now, I want to make it clear that I write here as a typical veteran about the military as a whole, the military as I experienced it. I am not a war hero. I did not break down doors in Iraq or man a forward operating base in Afghanistan. Those people are a cut above, and they, as individuals, deserve all our respect.

That, however, is my point. These elite make up only a small segment of the military. Most veterans did a variety of support jobs. Most military leaders, particularly senior leaders—whatever their background may be—are politicians trying to make the next rank.

In my mind, there is a world of difference between the soldier in his first tour of duty with a baby at home who risks death to fight for his country overseas, and the colonel on his fourth marriage with seven deployments in his twenty-third year of service. The former is making sacrifices to give back to his country. The latter is making sacrifices to make his career.

I’m not saying we should condemn the colonel. We should not, however, act as if he is sacrificing himself in some noble, altruistic hara-kiri for his country. Indeed, anyone who has ever served knows that the military is full of field-grade and general officers (and senior enlisted) who will happily step on and tyrannize their people for the sake of their own careers.

The point is that we should treat these people as people, not as some kind of superheroes. With few exceptions, they’re not. While perhaps many may dress up their sacrifices in the trappings of patriotism in a way that the senior-level investment banker cannot, the two often share the same drive and personal ambition.

We appreciate the respect and gratitude we receive from those who could have served but chose not to do so. But we want to be allowed to engage with society on an equal footing.

By holding us on some kind of different plane—I’m not sure it’s a higher plane—you’re really just excluding us from the conversation. You give lip-service deference but then ignore what we have to say, lest you be put in the uncomfortable situation of having to disagree with us explicitly. That does more harm than good for everyone.

Enough with the deference to the military already. It’s unwarranted, unhealthy, and unwanted, except by those to whom it most certainly should not be given. Jesus as a Politician

Spread the loveIn this post, I discuss the Jesus as a politician motif, an unfortunate attempt to use the divine as the authority backstopping our own political biases. Photo by eva101 is licensed under CC Read more…

Spread the loveThe more I interact with people of all different political beliefs, the more I realize you can’t win with some Trump voters. Photo by Michael Candelori is licensed under CC BY 2.0.  Politics is interesting for Read more…

Politics Is So Small

Spread the loveAs we endure another election cycle and witness the politicization of a worldwide pandemic, it’s easy to get discouraged. We must remember that politics is so small. There is so much more to Read more…