In this post in my series “God and Man at Yale Divinity,” I share my paper on the Judaea Capta coins in the Roman Empire. This content uses referral links. 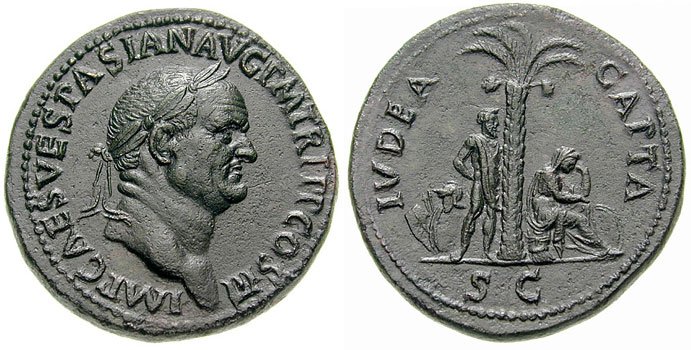 Coinage in the Roman Empire served as a powerful propaganda tool by which imperial authorities could exert their political influence throughout the empire. The use of coinage as propaganda is no more readily apparent than in the issuing of the Judaea Capta coins celebrating the suppression of the Great Jewish Revolt of 66 to 70 CE.

While there was precedent for issuing coinage to celebrate military success, imperial authorities minted coins commemorating this victory in a surprisingly large quantity. The revolt required a massive Roman military effort to suppress, and the coinage memorializes this massive display of Roman strength.[1]

The coins celebrated the victory of the Romans over Judea and affirmed the power of the newly established Flavian dynasty. They featured prominently either the face of Vespasian, the Roman general called away from suppressing the revolt to become emperor himself, or his son Titus, who succeeded his father in command on the field in Judea and later on the throne in Rome.[2]

It, therefore, follows that the Judaea Capta coins were minted with the highest frequency from 70 to 73 CE, as Vespasian was securing his grip on power, and then again from 80 to 81 CE, when his son Titus succeeded him as Emperor.[3]

These coins made use of prevalent symbolism for the Jewish nation to commemorate the Roman victory. The palm tree in particular, a well-known symbol of Israel, appeared prominently on the Judaea Capta coins. These coins also usually included the phrase Iudaea Capta (“Judea captured”) or Iudaea Devicta (“Judea defeated”) and, on their reverse, a depiction of a Jewess mourning, sometimes bound, under a palm tree.

Other popular images included a bound male captive appearing with the Jewess, or the emperor stepping on the helmet of a captive.[4] A rare coin featured Vespasian riding in victory on a chariot leading behind him a bound and naked Simon son of Giora, the leader of the Jewish revolt.[5] This image commemorated the actual execution of Simon in Rome (Jewish Wars 7.148-155).[6] Notably, Simon is the only leader of a revolt known to appear on Roman coinage.[7]

The message of the Judaea Capta coins, however, was made more forceful by the fact that they were not the first coins to commemorate the Roman victory over the Jewish revolt. Shortly after the fall of Jerusalem in 70 CE, the empire minted Judaea Recepta coins, more in keeping with previous coins commemorating the suppression of a revolt.

Recepta coins were typical depictions commemorating the return of a rebellious province to the “embrace of empire,” having precedent in the commemorations of suppression of earlier revolts elsewhere in the empire. (For example, Asia Recepta coins commemorated Augustus’ subdual of an Asian revolt in the 20s BCE.) In that same spirit, the earlier Judea Recepta commemorated the restoration of the status quo of Judea as a Roman province.[8]

The depiction of the Jewish people on the later Judaea Capta coins, however, was reminiscent of the imagery the Romans used to represent the conquered “barbarians” of Gaul and Spain. Such imagery served to portray the captive people as barbaric and uncivilized in contrast to their Roman overlords. It was atypical to so depict a province that had already previously been under Roman control.

The later coinage, therefore, suggests the beginning of an antagonistic relationship between Rome and Judea persisting after the suppression of the rebellion.[9] Further, the fact that the words for “Judean” and “Jew” were the same meant that the Jews throughout the empire might have understood these coins as a mark of antagonism toward the Jewish race in general, not merely those residing within the territorial confines of the Judea.[10]

Coins were a powerful propaganda tool for imperial leadership, allowing the emperor to spread his message easily throughout the empire. Indeed, it is no coincidence that, when Jesus is questioned about paying taxes to Caesar, he asks for a coin depicting Caesar, which was readily available (Matt 22:15-22).

Their ubiquity ensured that the imperial message permeated throughout the provinces, and the propaganda power of such coinage is no more clearly seen than in the Judaea Capta coins of the late first century CE.

[4] Deutsch, 51. These were such well-known depictions of a conquered people being brought into the Empire that Michael Kochenash suggests that the writer of Acts in the New Testament appropriated this imagery in his depiction of the interaction between Cornelius’ and Peter in Acts 10:25-26 to make a statement about the counterintuitive equality that Gentile believers acquired within the new church. Michael Kochenash, “Cornelius’s Obeisance to Peter (Acts 10:25-26) and Judaea Capta Coins,” The Catholic Biblical Quarterly 81, no. 4 (October 2019): 636-37.