In this post in my series “God and Man at Yale Divinity,” I share my paper on the purpose of theology in the writings of Joseph Ratzinger. It is the first of three papers I wrote for the Systematic Theology course I took during my second semester at Yale Divinity School. This content uses referral links. 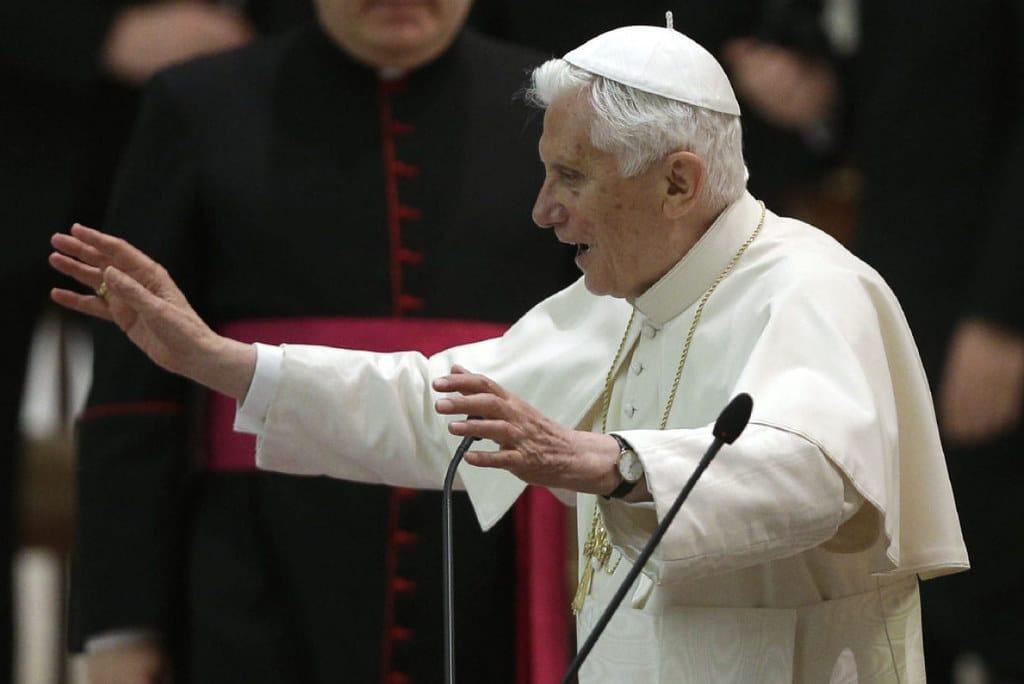 Joseph Ratzinger may be the greatest theologian to occupy the throne of Saint Peter since Leo the Great fifteen hundred years ago. For more than half a century, he has held a prominent place within Catholic thought as theologian, professor, bishop, and pope.

Joseph Ratzinger does not engage in theology as a mere academic exercise, but, with pastoral temperament, focuses on theology as the lifeblood of a community of faith and the driver of collective progress. To Ratzinger, the purpose of theology is to draw all believers together as one into conversation with God, in order to work out, in tangible form, the message of Christ in the world.

Theology is the outworking of an ongoing conversation with the divine. It is not merely humanity’s efforts to describe God as other, but rather to engage directly with him.

However, the individual cannot successfully undertake such an endeavor in isolation. A theologian cannot settle for cliché academic philosophy, pontificating and speculating in seclusion about some ultimate metaphysical reality somewhere beyond the physical realm.[1]

This conversation between God and humanity, however, is just that: a conversation. Theology is not a speculative human monologue directed into the void. God’s most significant contribution to this exchange, his magnum opus, is his full self-revelation in the person of Jesus Christ.

The Incarnation demonstrates the purpose of salvation, for it is the clearest example of God’s ongoing and active conversation with humanity through the outworking of his liberating work among the human race. Jesus is Savior, not because he gives some glimpse into an otherwise unknowable Aristotelian prime mover, but because he is “a God related to existence.”[3]

The Incarnation is both a profound statement of the divine in the ongoing conversation with humanity, as well as the ultimate expression of the practical outworking of the Christian hope in daily life. Through Jesus Christ, God brings all humanity into himself as a single community of faith. There is no God only of the individual, for a solely personal God is no God at all.[4]

Christianity is not a mere looking back, nor is it limited to philosophical speculation about “the eternal” or some ultimate metaphysical reality. Instead, Christianity is “above all things a looking forward, a reaching-out of hope.”[5]

To Ratzinger, the community of believers is indispensable to the Christian faith. Consequently, he stresses the importance of the Church and rejects attempts to reduce Christianity to an individual’s path to a blissful afterlife.

If God were concerned only about the salvation of individual souls, Ratzinger argues, Christianity itself would be unnecessary. “The salvation of the individual as individual can and could always be looked after directly and immediately by God…”[6]

Accordingly, Christianity is more than a grand self-help scheme. Rather, “man is himself only when he is fitted into the whole: into mankind, into history, into the cosmos…”[7]

This coming together into the “Community of Love” that is the Church allows for the ongoing conversation between God and man in a trinitarian dialogue between the individual, the community, and the divine.[8] Through this everlasting exchange, the Church as community fulfills the purpose of theology, including attending “constantly to man’s sufferings and his needs, including material needs.”[9]

This message of Christianity’s call for immediate action is echoed in the black liberation theology of James Cone. While a cursory reading of Ratzinger and Cone does not suggest significant similarities between the two, further reflection on their works reveals a shared emphasis on the immediate liberating power of Christianity in the here and now.

In many ways, therefore, Cone’s writing is a contextualized expression of a theology quite similar to Ratzinger’s own contextualized thought. Cone’s stress on the liberation of the oppressed as the purpose of theology is not far removed from Ratzinger’s insistence that theology necessitates concern for the current, practical needs of people.[10]

Turning salvation into, as Cone puts it, “an objective act of Christ in which God ‘washes’ away our sins in order to prepare us for a new life in heaven,” misses the whole message of Jesus’ life.[11] Ratzinger echoes this sentiment, writing “[f]or the salvation of the mere individual there would be no need of either a Church or a history of salvation, an Incarnation or a Passion of God in this world.”[12]

In this same vein, Ratzinger and Cone intersect one another on the centrality of the cross. Through the cross, Cone writes, “Jesus achieved salvation for the least through his solidarity with them even until death.”[13] He goes on, “God took the evil of the cross and the lynching tree and transformed them both into the triumphant beauty of the divine.”[14]

The suffering of the cross is valued, not because suffering should be valued for its own sake, but for the exclamation mark it placed on the ongoing conversation between God and humanity. As Ratzinger proclaims, Christ’s “crucifixion is his coronation.”[15]

None of this is to deny that Ratzinger and Cone are very different thinkers. Indeed, Ratzinger has been critical of liberation theology—though he has praised some of its aspects that are particularly prominent in Cone’s writing.[16]

Nevertheless, readers should not allow the apparent differences to obscure their commonalities. While he may come at it from a different angle than Cone, Joseph Ratzinger, in denying the individuality of the Christian faith and stressing God’s work in the wider community, sees the liberation of humanity as a whole at the heart of his theology.

For both of these theologians, theology serves to perpetuate this conversation between God and humanity that pushes individuals toward love of the divine and one another. Without this conversation, theology devolves either into anthropology, studying human spiritual practices and understandings, or metaphysical philosophy, seeking to grasp the existence and nature of the divine with minimal practical effect.

Therefore, theology must be normative, guiding humanity in its behavior, both in relation to the divine and to one another.[17] Whether that plays out in fighting racism in the United States or in connecting isolated and suffering individuals with a wider loving community of faith in Western Europe, true theology is a call to action.

While “God doesn’t need theology,” he is nonetheless intimately involved in it.[18] He is an active participant in the ongoing conversation, in the pursuit of the eternal and immediate salvation of humanity.

From his infinite well-spring of divine love, culminating in full self-expression through his incarnation in Jesus Christ, God does theology right along with humanity. It is this God, the God in the trenches who eschews epicurean aloofness, that Ratzinger and Cone both profess.

[16] Joseph Ratzinger and Vittorio Messori, The Ratzinger Report: An Exclusive Interview on the State of the Church, trans. Salvator Attanasio and Vittorio Messori (San Francisco: Ignatius Press, 1985), 169-90. In addition, Cone’s statements on the atonement and his approval of violence run counter to Catholic teaching. See Cone, Lynching Tree, 150; Cone, Black Theology, 26, 54. Even there, however, Cone’s statements on the atonement could potentially be reconciled with an orthodox Christus Victor view and his thoughts on violence against oppressors with an Augustinian understanding of just war.

[17] See also Miroslav Volf and Matthew Croasmun, For the Life of the World: Theology that Makes a Difference (Grand Rapids, MI: Brazos Press, 2019), 53.

Joseph Ratzinger and the Purpose of Theology.pdf