In this post in my series “God and Man at Yale Divinity,” I share my paper on doubt and humility in the writings of Joseph Ratzinger. It is the second of three papers I wrote for the Systematic Theology course I took during my second semester at Yale Divinity School. This content uses referral links. 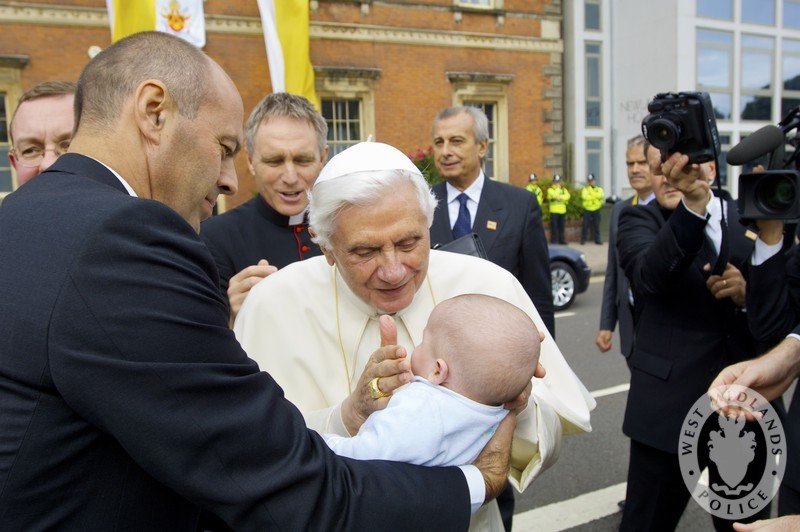 Photo by West Midlands Police is licensed under CC BY-SA 2.0

There is something fantastical about the Christian faith. To believe that which we cannot see runs counter to the very fiber of our being. Yet, at the same time, the internal drive to question and seek answers that lie just beyond our comprehension has prompted the proliferation of religious faiths that continue to endure despite post-Enlightenment predictions of their eventual demise.

Thus, there is a counterbalancing of doubt: doubt in the existence of the divine and doubt in its non-existence. With insightful and sometimes cutting honesty, Joseph Ratzinger acknowledges the reality of this doubt that points us toward humility. This humility pushes us toward the flourishing life by prompting us to submit our doubts to faith in a manner that simultaneously drives us toward belief and promotes a deep and meaningful love of neighbor.

The Universality of Doubt

Doubt is a universal experience, affecting the most pious believer and ardent skeptic alike. Even for the saintly devotee engulfed in the life of the Church, belief is ever-fragile, constantly subject to the most vicious attacks of uncertainty.

Such doubts are not limited to questions of dogma or esoteric theological debates that divide various religious traditions. Instead, these hesitations present regular existential threats to faith in its entirety, what Ratzinger calls “a question of all or nothing.”[1] During these attacks of uncertainty, there is nothing to prevent that fall into a belief in abject nothing and a complete abandonment of faith.

Yet such vicissitudes are not limited to believers. Skeptics, too, must struggle with doubts in their unbelief. There is doubt even outside of faith, and the pain and torment of uncertainty are unavoidable. No amount of suspicion or rational thought can suffocate the ever-present possibility that, as Ratzinger puts it, “belief may after all be the truth.” We may reject faith, but we cannot reject uncertainty. It is an inalienable part of the human experience.[2]

In this essential aspect of our humanity, a certain humility arises as a virtue that doubt itself cultivates. There is, after all, no escape from this very human state. On the most fundamental of existential questions regarding the human condition, there is, therefore, no place for self-affirmed certainty.

Doubt demonstrates the human limitations that handicap us all as it proves our powerlessness to find that which is necessary for our own internal satisfaction. God must always remain beyond our grasp.[3] Acknowledgment of this reality cannot but lead us to humility.

Yet, what does it mean to speak of humility as a response to a universal, suffocating doubt? As the virtue from which doubt as an essential element of the flourishing life springs, humility is a submission.[4] It is a recognition of our weakened, limited state that prompts us to come before a God in whom we struggle to believe with the willingness to lay down our need for self-mastery. It is a recognition of how blind we are if we only trust what we can know with certainty, if we follow only our natural inclinations.[5]

We recognize that our search for meaning is in vain because we acknowledge, as Ratzinger writes, that meaning “cannot be made but only received.”[6] Humility is, therefore, a recognition of our own insufficiencies.

Faith in the face of this doubt requires a continuously humble posture because faith is an ongoing struggle against a doubt that never departs. Faith is a choice to believe despite contrary internal compulsions; it is an act of complete submission that we must make over and over again.[7] The humility that results from constant self-denial, the repeated acknowledgment of insufficiency, cannot help but change how we see the world and one another.

An acknowledgment of universal doubt, however, could easily lead to the belief that any faith should be held only tentatively. Evangelism, in particular, would be out of the question, given how uncertainly those choosing faith must stand upon their own ground. How could an attitude of humility allow for any kind of effort to pull others from their own positions of doubtful skepticism?

There is something compelling about this argument. Indeed, if we are all plagued by doubt, should not a mutual appreciation for this shared state charitably give rise to a “live-and-let-live” philosophy that does not presume to encourage others to travel down the path we have so tenuously trod?

The scholar John Hick encourages such an understanding of humility and rejects any kind of claim that Christianity may make as the “unique finality as the locus of the only full divine revelation…”[8] If we are all plagued by doubt, why should Christians not merely recognize all religions as diverse attempts to resolve that doubt, to reach what Hick calls the one “ultimate Reality”?[9]

For all his discussion on doubt, however, Ratzinger rejects such an argument. While perhaps counterintuitive, the humility that grows from doubt does not call for a recognition of relativism in the face of uncertainty. Instead, it pushes us toward belief in the Christian faith as the ultimate truth.

By submitting to a call to believe despite our doubt, we humble ourselves before a divine calling, through which we acknowledge a truth we come only slowly to understand. Indeed, understanding follows belief, not the other way around.[10]

The humility that springs from doubt does not, therefore, prompt us to acknowledge the unknowability of truth. Rather, it pushes us to reject any internal compulsion to recognize truth as unknowable, and this leaves no room for relativism or “maybes.”[11] As Ratzinger writes, “A faith that we ourselves can decide about is not a faith in the absolute.”[12]

This type of humility prompts us to make a choice despite our internal vicissitudes. Indeed, it is the submission of ourselves, of our doubts, in humble response to the divine calling that prompts us to leave behind the internal maybe that inhabits us all.

For Ratzinger, this submission is a manifestation of love. To acknowledge our doubt and to believe anyway is to encounter God.[13] That is real humility, the real self-denial required to encounter the divine. Then, in finding God, we find love.[14]

While the believer and the unbeliever are bound together by their mutual doubt, the believer is additionally bound to the unbeliever by a love of neighbor, which springs forth from a love of God found through a humble submission to faith.[15] Love demands a sharing of truth as the lover sees it, and this does not change if we recognize that the lover may be wrong. Those holding what they believe to be true must share that truth, without violence or coercion, with those they love.[16]

The Arrogance of Relativism

To Ratzinger, there is no room in this scheme for conforming that belief into something unobjectionable or unoffensive. Such efforts do not demonstrate humility, but rather arrogance, for there is no personal submission to a received claim. Relativism denies the capability within the person, both within the believer and the non-believer alike, of what Ratzinger calls the “capacity for truth.”[17]

In addition, it leaves no room for love of neighbor. As Ratzinger writes, such an effort “implies a lack of sincerity in dealing with questions of the non-Christian, whose ‘perhaps not’ should worry us as seriously as we want the Christian ‘perhaps’ to worry him.”[18]

Ratzinger describes well the experience of doubt that produces humility. “The believer will repeatedly experience the darkness in which the contradiction of unbelief surrounds him like a gloomy prison from which there is no escape, and the indifference of the world, which goes its way unchanged as if nothing happened, seems only to mock his hope.”[19] This doubt is essential to the flourishing life because it gives rise to humility.

One cannot believe without submitting one’s doubts before an external force and choosing, as an act of obedience, to trust. This is humility—to believe despite oneself.

Furthermore, humility is a transferable skill. The same humility that prompts us to believe provokes us also to approach our neighbor with love and submission, even without compromising the message of faith to which we have humbly yielded ourselves. That is a flourishing Christian life: to believe in the face of doubt and to share that belief with others as we understand it in love.

[4] The humble submission required in choosing faith in spite of doubt inevitably manifests itself in obedient behavior. The Psalmist does not speak of atheism in terms of an intellectual affirmation but in terms of “loathsome and corrupt” deeds (Ps 14:1, NABR). James similarity speaks of the interconnection of faith and action (Jas 2:14). Scripture, therefore, points to belief in spite of doubt as intertwined with a humility that inevitably leads to just and righteous living with God and neighbor (Mic 6:8).

[7] Benedict XVI, “On the Meaning of Faith,” in The Essential Pope Benedict XVI: His Central Writings and Speeches, ed. John F. Thornton and Susan B. Varenne (New York: HarperSanFrancisco, 2007), 211-12.

[12] Benedict XVI, “Relativism: The Central Problem for Faith Today, Address to the Presidents of the Doctrinal Commissions of the Bishops’ Conferences of Latin American, Guadalajara, Mexico, May 1996,” 235.

[14] Benedict XVI, “Deus Caritas Est (God Is Love): Encyclical Letter of the Supreme Pontiff Benedict XVI to the Bishops, Priests and Deacons, Men and Women Religious, and All the Lay Faithful,” 396.