The God we see in the Old Testament is only partially revealed. In Christ, that slow, progressive revelation came to fruition, and there is no additional revelation to follow. 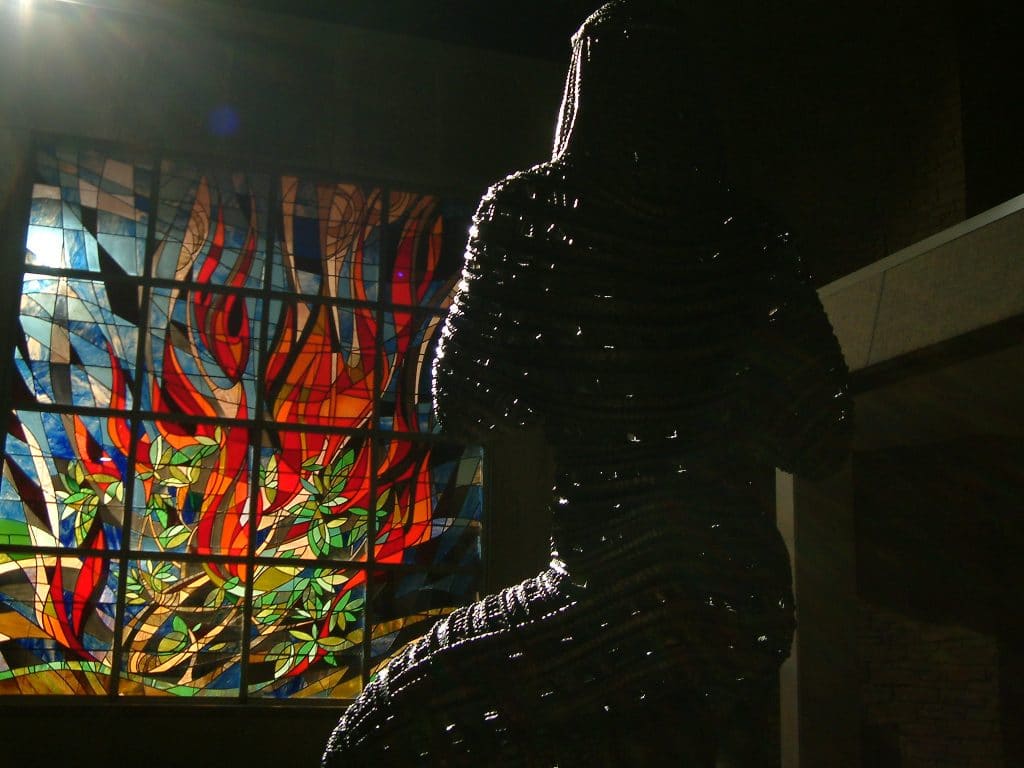 68 By love, God has revealed himself and given himself to man. He has thus provided the definitive, superabundant answer to the questions that man asks himself about the meaning and purpose of his life.

69 God has revealed himself to man by gradually communicating his own mystery in deeds and in words.

70 Beyond the witness to himself that God gives in created things, he manifested himself to our first parents, spoke to them and, after the fall, promised them salvation (cf ⇒ Gen 3:15) and offered them his covenant.

71 God made an everlasting covenant with Noah and with all living beings (cf ⇒ Gen 9:16). It will remain in force as long as the world lasts.

72 God chose Abraham and made a covenant with him and his descendants. By the covenant God formed his people and revealed his law to them through Moses. Through the prophets, he prepared them to accept the salvation destined for all humanity.

73 God has revealed himself fully by sending his own Son, in whom he has established his covenant for ever. [T]he Son is his Father’s definitive Word; so there will be no further Revelation after him.

In this section of the Catechism, the Church sums up its teachings as laid out in the article entitled, “The Revelation of God.” Here the Catechism highlights the heart of the Catholic Church’s teaching in this area, as it sums up the main takeaways from this section. Of specific note are the ideas of divine self-giving and progressive revelation.

Paragraph 68 is particularly beautiful. God has not only revealed himself to man. He has “given himself to man.” That signals an extreme divine vulnerability. God is not merely an all-powerful deity sitting on high upon his eternal throne, ruling his creation from a distance at his arbitrary whim and pleasure.

Instead, he has given himself to man. He has sacrificed and has loved with a real, deep, personal love. He has experienced pain and suffering. The pain of rejection by the people he so desperately loves. The suffering of human existence in his very person when he took on flesh in the person of Jesus Christ.

This is the God revealed in Scripture, in the apostolic tradition, in the teachings of the Church, and in the Eucharist. Indeed, by making Christ’s presence manifest in the sacrament, God continues to give of himself, allowing those who love him to participate in the once-for-all sacrifice of Jesus Christ and take Christ into themselves, uniting themselves with him in a very real, physical way. This is the God who loves, or, as John Sanders would put it, the God who risks.

Here, the Church also accounts for the Old Testament’s difficulties, including both ungenerous readings regarding other people groups and apparent contradictions in presenting the divine character. The God of Joshua seems quite different from the God of Isaiah. The God of Ezra looks much different than the God of Ruth.

This is not a contradiction in Scripture, per se. Instead, it is a mark of the progressive revelation of God. God meets people where they are and reveals more of himself and corrects misunderstandings and mischaracterizations of his divine character as his people are ready to accept it.

The work of the Holy Spirit in the Church and the lives of man does not supplement that revelation. Rather, it provides a greater understanding of the final revelation already revealed. It lends greater clarity to an underlying revelation that does not change.

Progressive Revelation for All People

The Catholic Church also recognizes the differences between God’s covenants with Israel and the rest of the world. That is, God chose Israel to provide the unique, progressive revelation of himself.

Yet, God still maintains a covenant with those outside his chosen people through the Noahic covenant. This is why the Church can recognize that there is no salvation outside the Church, while at the same time affirming that Christ may save those outside of the Church by incorporating them into his body without their knowing it.

Those who seek God with the limited information available to them can find individual salvation through the grace of a God who meets them where they are. This does not apply only to those who have never heard of Jesus.

I believe that God has grace for those who seek him but who do not appreciate—whether through a lack of mental acuity or for want of intellectual clarity—that God has provided the means of salvation through his Son Jesus Christ worked out in the life of the individual and the community through the Church.

Thus, I believe that all those who would have joined the Catholic Church had they but known that it is the true Church and means of salvation will be saved. This does not necessarily entail an exercise of middle-knowledge on God’s part, but rather an observation and understanding of the person’s character.

One who loves and seeks God may guess wrong or simply misunderstand the salvation path that God has provided. Yet, in seeking God, they demonstrate their love for him and their willingness to join the Catholic Church had they known it to be the true Church.

I have many friends and relatives who fit this description. They passionately love God and try to please him. They believe evangelicalism provides the best means of worshiping and serving God. Yet, I do not doubt that if God chose to reveal himself to them through a specific vision to tell them to join the Catholic Church, they would do so without hesitation.

God is ever anxious to show his love to those who love him.